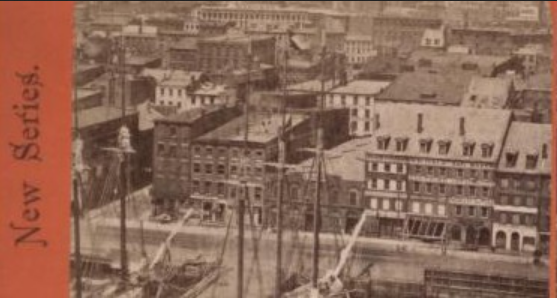 I teach a survey on American prose writing from the Civil War to World War I. To avoid a generic and unfocused slog, I decided to retool the course, organizing it around visual culture in the period in the hopes of giving it a more substantial intellectual backbone and allowing students, primarily advanced majors, to do a bit of research into the visual technologies and visual phenomena that are alluded to in the literature of the period.

So far so good, but I wasn’t sure how to organize this approach in ways that would encourage students to engage with the topic deeply. I didn’t, in other words, just want to assemble a bunch of slide decks and put students to sleep in the dark, nor did I want to write a bunch of blog posts with pretty pictures that few students would examine. I was vaguely familiar with Omeka, a free and open platform designed by the wizards at the Roy Rosenzweig Center for History and New Media at George Mason University, and, after a quick tour through the site’s resources, I convinced myself that we should use it extensively to collate and organize visual materials. My thought was that we would use the power of crowdsourcing to create a large, potentially massive, archive of images as we advanced through the syllabus. In my fevered imaginings of early August, students’ reading practices would be transformed as they interrupted their reading of, say, James’s Portrait of a Lady to look up London’s Tavistock Hotel (a lodging recommended to Isabel Archer early in the novel), download an image from Flickr’s repository of Internet Book Archive images, and fill out all manner of Dublin Core Metadata to guide the reading and thinking of other students in their own and subsequent semesters.

From there it was a small step to organizing the entire output of the class around Omeka:  I imagined small groups collaborating on self-designed exhibits linking, for example, gender and portraiture in postbellum American painting to James’s Portrait, or the photographic representation of African Americans at the Paris Exhibition to Du Bois’s Souls of Black Folk. The course would culminate with final research projects in which individual students would publish illustrated essays using Omeka and draw from our class’s repository of images.

Meanwhile, I had befriended Steven Zweibel, a CUNY librarian who was furiously working on DH Box, one of many remarkable projects to come out of Matt Gold and Stephen Brier’s Digital Praxis Seminar at CUNY’s MALS program. Stephen offered to add Omeka to DH Box and asked whether I would, in effect, beta test it with my class. Queue up the “teaching fail” motif:  gentle reader, I said “yes.” [Disclaimer: as you shall see, any fails that follow are my own. Steven has been extraordinarily generous and helpful and all of us should consider using DH Box in our teaching.]

Savvy readers of this feature will have already figured out what only began to dawn on me in early September. One should add novel, time-consuming features to courses sparingly—preferably one per semester—and I was adding three:  a new platform, a retooled course theme, and a new assignment structure. I think it was the end of September when it became clear how deeply over my head I was: at 11:30 p.m. I was emailing back and forth with Stephen about how to use the command-line interface to manually add plugins to Omeka; I was also trying to do a bit of research on the history of shop-window displays for my lesson on Sister Carrie; finally, I realized that the first group project was due in two weeks, and I wasn’t sure how one makes exhibits in Omeka or how to guide students through devising and completing the first group project.

It all unfolded less disastrously than it should have. On the upside, students did find the theme compelling and enjoyed the rare opportunity for research using primary sources in a survey course. They also played pretty nicely together, with all four groups producing workable, and sometimes excellent presentations on relevant topics. I especially remember presentations on the rise of the department store in conjunction with Sister Carrie and one on saloon culture in turn-of-the-century New York alongside close readings from Crane’s Maggie, a Girl of the Streets.

But this is an account of failure, and the problems were many and various. First, students didn’t spontaneously hunt for images as they read for class, nor did they seem to draw from others’ discoveries as they did research for their own projects, choosing instead to do random Google image searches. I should have provided scaffolding to require each student to find and upload material on a predictable schedule and a modest scale, with some early feedback and peer review to provide guidance. Second, I should have used a consistent tagging system to enable students to find materials relevant to topics (e.g., tagging materials inspired by readings of James with a James tag). Third, I should have streamlined the process of entering metadata for them: the Dublin Core standard encompasses a bewildering range of categories of metadata that is salutary for industrial-grade repositories but was overkill for us: I should have customized the fields to give students fewer options and a quicker, simpler workflow. Fourth, students needed less freedom and more hand-holding in devising group projects and assigning roles. Having done this kind of project many times since then, I’ve learned to “rough in” much more of the project for students and give them a topic, some initial bibliography, a contact in the library, and a set range of roles to divide out. Fifth, I needed to give students a sense of the overarching aim of the “build and share” ethos from the start. In the first week of class, we met in an IT classroom to learn how to enter images in Omeka, but I didn’t explain very well what Omeka is, what one published out of it, or what they would be eventually doing with it. Thus, students didn’t buy into the data-gathering and data-entry part of the process as much as they might have, and found it, at least initially, to be a distraction from the (too heavy) reading load for the course.

The last fail is in many ways the worst and most darkly comic. At the end of the term, I collapsed like a #digped John Henry, glad to be done and kind of happy, despite everything, with the students’ projects. After scraping myself off the couch to attend to some urgent personal grooming needs and my own research, I mostly forgot about the course until midway through the next term, when I was updating my site and hoping to link to some of the student projects. At this point I realized that Steven had carefully explained to me that DH Box was in beta and that each “box” would be deleted after a given period of time. Naturally, I neglected to back up anything, so all of the student work on the platform, along with the entire repository of images I might have used in future iterations of the course, was gone. Like Ishmael in Moby Dick, I alone lived to tell the tale. But even as Ishmael had a coffin to cling to, one scrap of my course remains. One of my students chose to build his final project on the hosted version of Omeka, so you can get some sense of what might have been.

Jeffrey Allred is Associate Professor of English and director of ACERT at Hunter College/CUNY, where he has taught since 2005. He is author of American Modernism and Depression Documentary (Oxford UP, 2010) and has published articles and reviews on American literature, modernism, digital humanities, and new media studies in American Literature, American Literary History, Criticism, Transformations, and Arizona Quarterly. He is currently working on a book manuscript, ABC of Modernism.

Previous: Using ePortfolio Image Galleries as Digital Storyboards to Visualize Scientific Concepts
Next: Live from Your Palm: Experiments with Using the Periscope Live-Streaming Video App in a Journalism Class