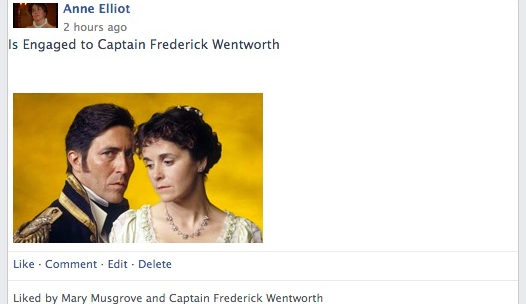 This assignment asks students to create a multimodal project wherein they adopt the voice, tone, and attitude of one of the characters from Jane Austen’s Persuasion (1817) in an effort to encourage critical thinking, analysis, and promote a better understanding of eighteenth- and early nineteenth-century literature.

For many undergraduates, literature written before the twentieth century is an area of great burden and difficulty (Rooks 2009). Even the most prepared students experience insecurity, doubt, and personal setbacks where eighteenth-century literature is concerned. Indeed, students’ unfamiliarity with the subject’s historical contexts and literary conventions lead many to take eighteenth-century literature courses during their third and fourth year of their undergraduate careers, if at all. As Emily B. Todd notes, students often perceive the period to “lack detail and psychological depth,” and instead perceive the literature purely as a historical document (2005, 1). While this assumption is frequently viewed as an inevitable aspect of teaching eighteenth-century literature to first and second year students, a low-stakes project from a recent introductory course for English majors at the University of New Mexico indicates otherwise.

In an effort to help students understand the playful nature of earlier English  literature, I ask them to create multimodal documents wherein they must adopt the attitude, persona, and language of a character from a Jane Austen’s Persuasion. As a result, students navigate an important exercise in voice, tone, syntax, and character—literary devices and terms discussed in our course. Perhaps more importantly, one of the central outcomes of this project is that students find the literature far more approachable and accessible than they previously thought.

When students are asked to complete such an assignment, it is important for them to understand what we mean when we say “multimodal.” I use the following definition from Takayoshi and Selfe: a multimodal assignment is composed using one or more “modes” of communication such as a combination of “moving and still images, sounds, music, color, words and animations” (Takayoshi and Selfe 2007, 1).

Then, students should understand that the final products of this assignment are diverse, but are all in the voice of a character: a dating profile, a Facebook or Twitter account, a Spotify playlist, instructional YouTube videos, or students may even decide to have a character write a series of Yelp! or Trip Advisor reviews. While many students did create separate Twitter or Zomato accounts for their characters, there is no need to create actual, public accounts or post projects on the Web if they do not wish to do so; instead, there are plenty of online generators—such as Fakebook—that will allow students to develop “fake” social media pages.

The diversity of assignments, while perhaps difficult to compare or grade, is important for allowing students to make rhetorical choices (Shipka 2005, 110–29). The most successful multimodal assignments are those that are first and foremost generated from choice; students think critically about why they made their choice of mode in relation to character.

Examples of the type of multimodal assignments available to students are listed on the following chart found on the initial assignment:

After students understand what multimodality means, there are two components of the assignment: 1) the multimodal document and 2) the reflection. The full assignment is found here.

It should be noted that this project was selected not because it is a perfect example, but instead that the student offers a well-rounded example of what can be accomplished from a student who is not “tech-savvy.” The full page is found here.

Below is Facebook account (Figure 1), using the online generator “Fakebook” and a section of a student reflection: Figure 1. Entries from Anne Elliot’s “Fakebook” profile with “likes” and comments from other characters.

Here is an excerpt from a student reflection:

For this project, I chose to make a Facebook (or, Fakebook) page for Anne Elliot. I found this to be extremely fun, even though I was initially nervous because I’m not at all tech-savvy. I had several posts written by Anne, and I decided to make the language in which they were written sound as close to what someone from her time period would speak like as I could; this was based off the language that was used in her exchanges with Captain Wentworth and Lady Russell in the novel. Although a lot of the ideas/information from these posts come from the narrator, I decided to change them to first-person accounts to suit the medium. I also intentionally made the posts sappy and/or tragic, since we talked about affect and the undercurrent of feelings in nearly all of Anne’s exchanges. For the Fakebook posts I moved chronologically: the first few posts were about her being hopelessly in love, hinting at the idea that love is hard and painful. She then posts about Captain Wentworth proposing to her, and her posts mostly become sappy, and all about her relationship.

In the reflection and the completed assignment, it is simple to see the direct ways in which the student makes choices based not only on the medium, but on their chosen character, Anne Elliot. Further examples of the assignment and reflection are below: Figure 2. Entries and images from Anne Elliot’s “Fakebook” profile detailing the news of her engagement to Captain Wentworth.

The student continues to reflect on Anne Elliot’s own self-identity as well as her interactions with other characters:

Through all these posts, those of us that know Anne can hear the “pity me” voice come through here, which is far more noticeable in the novel than it is in the film. NoOtice, as is the case with all her posts, each has only a few likes (mostly by Mary Musgrove or Lady Russell); we see she is not very popular. Her later posts indicate that the situation with her family is not going well; she claims that they do not support her happiness. I sort of imagined that Sir Elliot would have a problem with any choice Anne made because she never could please him; even if it was financially beneficial. This posts warrants both an angry comment from both her father and her sister. It was quite fun to create a taste of drama using the Fakebook medium and a bit of a family feud here, as we can admit that these on real-life Facebook exchanges are always amusing to read. Moreover, I thought it was important to capture the dysfunctional attitude of her family via the Facebook medium.

Both parts of the assignment were assessed in tandem. I ask for both the multimodal document and the reflection to be submitted on the same day. It is important for the multimodal document to be in the appropriate mode and maintain the appropriate tone; however, how a student articulates his or her decision-making is equally important in demonstrating understanding of the text.

The assignment and reflection are low-stakes in relation to the overall points offered in the course. I wanted the assignment to be a space where students could take risks and feel empowered through creativity, not burdened by it. Despite the low point value of the assignment, students were—overall—creative, insightful, and excited about the project.

The full rubric for the Character Analysis and Reflection is here. An example of A and F grade projects follows.

I designed this assignment with the goal of helping students feel confident approaching eighteenth- and early nineteenth-century literature, specifically Jane Austen’s Persuasion. In using the aforementioned idea from Shipka that rhetorical choices and choice of medium are foundational for successful multimodal assignments,I ask with great intention that students become the creators of these assignments. In this way students are empowered as creators and more willing to share in class discussion. In particular, I find Persuasion a valuable novel to incorporate this assignment. Unlike other Austen novels, many of my past students grappled with the maturity of Persuasion, particularly because of the ambiguity and affect Austen generates in her development of characters. Although I find this project a success with Austen’s Persuasion, for future classes—particularly upper-level courses—I will likely ask to students to use a character from a wider selection of literature from the course. I would further extend Shipka’s idea that choice is pivotal for the development of multimodal documents. Through this assignment students become agents of authority in the classroom. Indeed, I find that students are more forthcoming in their class discussions leading up to and after the completion of the character analysis assignment. Not only do they know what they’ve read, they know the mechanics of how it was written. Overall, the project was a success in regards to students’ willingness to engage with the course and with a text that is often challenging for introductory literature students.

In sum, this assignment allows students to feel confident in their understanding of a major novel from the early nineteenth century, as they must be extensively familiar with plot and character in order to focus on how one character interacts with the world of the novel and in relation to elements of socio-cultural life. Further, after completing this assignment, students are better able to appreciate the complexity of multimodal composition as it relates to older literature.

Kelly J. Hunnings is a PhD candidate in English Language & Literature and Bilinski Fellow at the University of New Mexico.

'Creating Multimodal Documents to Understand Literature' has no comments