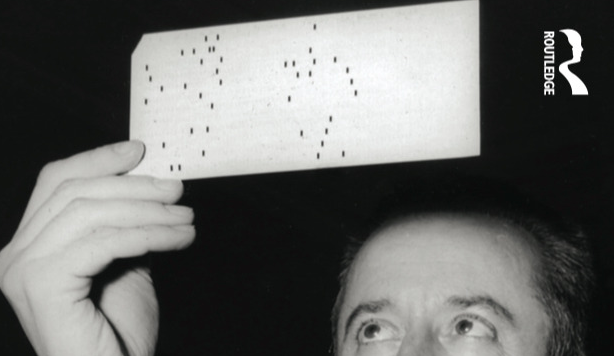 Digital humanities (DH) is a contested field—contested in terms of its definition, its scope, and its long-term relevance. One issue on which there has been much consensus is the central place given to the work of Roberto Busa when charting the origin of DH. It is standard fare in DH publications to cite Busa’s Index Thomisitcus as the first major project in humanities computing, the classic example of this being Susan Hockey’s history of humanities computing in the foundational volume A Companion to Digital Humanities (2004). In Roberto Busa, S.J., and the Emergence of Humanities Computing, Steven E. Jones complicates even this supposedly straightforward narrative, and he manages to do so even while indicating fruitful ways of understanding and advancing work in the field.

Roberto Busa (1913–2011) was an Italian Jesuit priest and scholar trained in philosophy at the Papal Gregorian University in Rome. A philological approach to studying the metaphysics of Thomas Aquinas eventually led Busa to travel to North America in 1949 in search of machine assisted methods for compiling a lemmatized concordance that included every word in Aquinas’s writings. Through correspondence and archival records, Jones tells the story of Busa’s collaboration with IBM to develop the Index Thomisticus using IBM’s iconic punched cards, a form of data storage for early computing. It is not difficult to see how contemporary scholars working in DH could point to this early relationship between a humanities scholar and the corporate technology leader as a point of origin for the field. Jones explains his demythologizing project: “It’s not my aim to debunk [the myth], but only to provide a more complicated picture of its history, to fill in some of the rich contexts out of which the myth arose in the first place” (9–10). While Busa is unquestionably an important figure in charting the development of humanities computing, and eventually DH, Jones is interested in situating Busa within a complex historical web of developments in media and technology.

This goal leads Jones to dismiss another, more elusive myth—the myth of “progress.” Nowhere is the temptation to view historical developments as an inevitable upward progression more evident than in studies of technology. Jones counters this assumption by attending to historical contingencies and “adjacent possibilities” as he traces the working relationship between Busa and IBM. Busa’s use of punched-card processing systems allowed him to process an impressive amount of data, but the system was hardly cutting edge. While these systems used technology that had been in place since the nineteenth century, IBM’s Selective Sequence Electronic Calculator (SSEC) was also on display in the company’s Manhattan showroom. This iconic early computer was not made available to Busa, but it played a large part in IBM’s public image. Jones discusses the computing culture surrounding the SSEC at length as a way of setting Busa’s work in historical context. One major aspect of this context is the neglected role of women in the history of computing. Jones emphasizes that “there were women everywhere in early computing, in one capacity or another, from wartime ‘computers’ using calculating machines, to plugboard ‘programmers,’ to keypunch operators, to system operators and some software programmers, once that became a possibility” (64). There were many women who worked as operators with Busa on the production of the Index Thomisticus, and Busa trained many young women to be operators at his Center for Automation and Literary Analysis in Gallarate, Italy. However, the substantive work done by these women was often categorized as simply “clerical,” and the twenty first century has seen a major decline in the number of women in professional programming. The myth of progress is further complicated as Jones discusses tensions between academic, political, and corporate interests, as well as issues of advertising and the public perception of computing. He also highlights the array of alternative technologies that were on offer at the time that Busa was processing his punched cards.

Jones constructs a layered and detailed historical narrative that takes account of the personalities, spaces, and material objects involved. This serves to flesh out Busa’s own accounts of his work (which Jones cites frequently) and IBM’s corporate records. Jones’s ability as a storyteller is particularly evidenced by the “exploded view” that he offers of the initial 1949 meeting between Busa and Thomas J. Watson, Sr., CEO of IBM. He focuses on various details of the image of the two men meeting in IBM’s offices to explain the political, social, and technological issues that set the stage for the initial conversation and conditioned the ongoing relationship.

Several aspects of Busa’s projects draw out the relationship between developing technology and the humanities as they relate to research and teaching. First, the public demonstrations that Busa gave of his work—particularly one held at IBM World Headquarters on Madison Avenue in June of 1952—show how the interactions between computing and humanities research influence pedagogy. His demos before interdisciplinary groups of scholarly, corporate, and ecclesiastical figures were impressive displays of automated technology, but “it turned out to be the general concepts of how to use punched-card machinery to treat language as data to be processed … that influenced practice over the long term” (82). By introducing punched-card technology into philological analysis, Busa began to demonstrate how vast amounts of data generated from a text could also generate new perspectives on that text. His teaching demonstrations alerted scholarly and corporate communities to the way that the iterative process facilitated by computing allowed for a deconstruction, fragmentation, and reconstitution of texts, making technology a real collaborator in the process of creating meaning. Through these technology demonstrations, Busa sought to convince a varied audience of influential people of the usefulness of his adaption of technology in the service of the hermeneutical process. With the growth of Silicon Valley, we have all come to be aware of the formative capacity of this sort of technology demo. Jones cites Steve Jobs’s Apple Computer events and TED Talks as formats comparable to the demos of Busa and other early tech innovators. As with these more recent examples, the intent of Busa’s demos were not simply to transfer information about a new technology. Just as the public unveiling of a new Apple product creates expectation and emphasizes the way that a new iPhone, iPad, or other device can have a transformative effect on our lives, so Busa’s demos were designed to inform, impress, and indicate the potential his punched-card technology had to transform humanities research.

Second, Busa’s Center for Automation and Literary Analysis (CAAL) featured a pedagogical method that was transformed by the interaction of humanities scholarship and computing. Jones describes the CAAL, founded by Busa in 1956, as “a vocational ‘training school for key-punch operators,’ technicians of automated accounting machinery.” The CAAL’s “first reason for being was research … with students working in effect as interns, learning on the job for two-year stints” (119). The students at the CAAL (predominantly young women) found themselves in an environment that combined elements of the laboratory, factory, and religious community as they gained experience operating IBM machines as they worked to create, among other projects, an index for the recently discovered Dead Sea Scrolls. The CAAL was supported by a network of corporate and governmental patrons, and it benefited from Busa’s continuing relationship with IBM. The operators didn’t receive diplomas for their training, but they gained experience in marketable job skills. This combination of scholarly research with vocational training in computing technology leads Jones to describe CAAL as “arguably the first humanities computing center” (134). Many of the same critiques that have recently been leveled at DH initiatives in higher education (see Allington, Brouillette, and Golumbia 2016) can be seen in Jones description of the CAAL. Corporate, government, and scholarly interests were intertwined in Busa’s projects. New technical skills were learned in a context that served humanities research.

Jones demonstrates the two-way street of the pedagogical process—available technologies shape the processes of research and learning, and educational traditions influence the adoption and use of new equipment and methods. This can be seen in the contrast between the industrial model on which CAAL was based and the humanistic impulse behind its work. The training school was “both internship and production line for data processing of texts” (125). The CAAL was housed in an old industrial building, and IBM’s machines were arranged on the old factory floor. The image invoked by the setup is some combination of a factory line and a scriptorium. Technical skills were being learned not simply to manufacture a product but for the deeper understanding of a literary text. One important way Jones illustrates this dynamic is by highlighting Busa’s Jesuit identity. Jones suggests that the Jesuit focus on higher education and on broad engagement with secular culture contributed to Busa’s willingness to build networks through unlikely partnerships and to view the creative implementation of technology as an extension of humanities research.

Jones, like many practitioners, delights in the indeterminacy and indefinability of the broad field of DH. By inspecting, atomizing, and reconstituting the historical context and technical details of Busa’s career, he succeeds in demonstrating that this indeterminacy was present from the outset. Jones pushes back against definitions of DH that tie the field too rigidly to Busa’s project. He wants a definition with broad enough boundaries to include work in areas such as media studies, video games, social media, and more. Elsewhere, he defines DH broadly “as an umbrella term for a diverse set of practices and concerns, all of which combine computing and digital media with humanities research and teaching” (5). Paradoxically, Jones demonstrates that Busa’s project was only one of any number of contributing factors to the development of humanities computing and (later) DH while also uncovering new and unexpected ways that the details of that project are relevant to the expansion of the field. Though Busa initially presented his work in humanities computing terms—with machines filling a utilitarian role in otherwise traditional humanities research—digging into the material specifics of his projects reveals that technology and its layered applications were making theoretical contributions at every stage of his research. With this substantive and engaging book (as well as the Tumblr site that augments the book), Jones has made an essential contribution to the field of DH.

'Demythologizing the Priest and his Punched Cards' has 1 comment