Review of Too Big to Know: Rethinking Knowledge Now That the Facts Aren’t the Facts, Experts Are Everywhere, and the Smartest Person in the Room Is the Room, by David Weinberger (NY: Basic Books, 2012; Kindle Edition, 2012).

David Weinberger’s new book Too Big to Know convincingly argues that the era of expertise has ended. 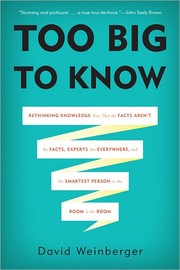 Too Big to Know might be called a trade book on digital epistemology: it makes the bold (though instinctively true) claim that the Internet has redefined knowledge itself. Whereas the book might be said to deal with the problem of what is popularly known as “information overload,” Weinberger himself also uses the term “knowledge overload,” and whatever it is called he encourages us to see it not as a problem so much as a reshaping: knowledge may once have been imagined as a pyramid, with facts as the broad foundation and wisdom as the tapered apex, but it is now best envisioned as a network. Networks have their inequalities, to be sure. They are not perfectly smooth democratic planes. Networks like the Internet, networked projects, networked social structures, and networked knowledge are, in Weinberger’s metaphor, like oatmeal: sticky and lumpy configurations where “some nodes are more equal than others” (165). But if we are beginning to think of knowledge as a network, we are beginning to think of knowledge as unhierarchical, asymmetrical, sloppy, decentralized, and infinitely scalable.

The shortest version of Too Big to Know’s central argument is Weinberger’s phrase “Knowledge is now a property of the network” (xiii), and the chief strength of the book (besides its springy writing) is that it is rich in examples both current and historical of this catchy but rather abstruse claim. In chapter two, “Bottomless Knowledge,” Weinberger gives a historical account of the invention of the thing called a “fact,” canvassing such fact-based enterprises as the US Census, Salk’s polio vaccine, Clinton’s welfare reform, the Bible’s “et Verbum caro factum est,” Malthus’s work on population growth, Bentham and Dickens, Victorian blue books, Hunch.com, Data.gov, and Darwin’s On the Origin of Species. In my favorite chapter, “Long Form, Web Form,” Weinberger undertakes an extended comparison of On the Origin of Species with Nicholas Carr’s The Shallows while at the same time responding to the argument of the latter that the Internet is not making us smarter. Weinberger usefully argues that the medium of expression has a lot (though not everything) to do with how we think of knowledge, and that long-form books like those by Darwin and Carr (and Weinberger) “do not express the nature of knowledge. They express the nature of knowledge committed to paper cut into pages without regard for the edges of ideas, bound together, printed in mass quantities, and distributed, all within boundaries set by an economic system. To think that knowledge itself is shaped like books is to marvel that a rock fits so well in its hole in the ground” (100). Weinberger also wisely recognizes that knowing that knowledge is a property of the network isn’t all that helpful, given that most of his readers are not networks, and he thus includes two pragmatic chapters: one (“Where the Rubber Hits the Node”) on how to make decisions and structure organizations in the new world, and one (“Building the New Infrastructure of Knowledge”) on how to make and structure the Internet itself so as “to make the network a better infrastructure for knowledge” (46). While certain proactive readers may find comfort in these guidelines for action in our new epistemic reality, other readers, especially scholars, may better appreciate Weinberger in theoretical mode, as when he writes, “[A]t the core of knowledge’s new exaltation and transformation is a straightforward acknowledgement of one basic truth we’ve always known but that our paper-based system of knowledge simply could not accommodate: the world is far, far too big to know” (xiv). Such balancing of metaphysical declamation with businesslike recommendation is typical of Weinberger, with his doctorate in philosophy and his background in marketing at early Internet startups, and that balance is another point in this book’s favor.

If Weinberger has convinced us that knowledge is now a property of the network in the same way that boiling at 100 degrees Celsius is a property of water, does that mean that knowledge is no longer a property of the individual? And does it mean that any network will possess knowledge, just as any sample of water will possess a 100 degree boiling point? Well, fortunately for the individual’s ability to know, water isn’t the only liquid that boils at 100 degrees Celsius; less fortunately for the ability of any network to possess knowledge, any liquid’s boiling point is dependent on environmental factors such as pressure. How do I know? I read http://www.thenakedscientists.com/forum/index.php?topic=37393.0. Of course, linking to an online forum isn’t how I usually make a point in scholarly writing, but after reading Too Big to Know, I can’t see exactly why I shouldn’t.

Amanda French is currently Research Assistant Professor and THATCamp Coordinator at the Roy Rosenzweig Center for History and New Media at George Mason University, where she helps people all around the world organize scholarly “unconferences” on humanities and technology. One of her primary professional interests is in teaching digital methods to the next generation of humanities scholars, an interest she has pursued both for the Digital History Across the Curriculum project at NYU and as a Council on Library and Information Resources Postdoctoral Fellow at NCSU. She earned her doctorate in English from the University of Virginia in 2004, where she encoded texts in TEI for the Rossetti Archive and the Electronic Text Center.

Previous: Classroom Rules
Next: Technologues and Pedagogues: How an Instructional Technologist and an Instructor Transformed a Course and Improved Student Writing

'Knowledge Under Pressure' has 3 comments