Review of Where Good Ideas Come from: The Natural History of Innovation, by Steven Johnson. New York: Riverhead Books, 2010. Print.

In this review, concepts introduced in Steven Johnson’s book Where Good Ideas Come From are used to determine how educational systems and learning technologies can best foster innovation.

Perspectives expressed herein are our own and should not be construed as representing either of our institutions. 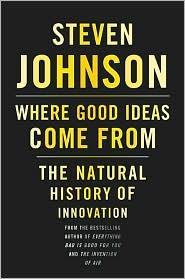 What if the goal of education was to help students become innovative? What would educational technologies aimed at such a goal look like?  These are the kinds of questions we found ourselves asking after reading Steven Johnson’s Where Good Ideas Come From: The Natural History of Innovation.

Johnson provides an extensive tour of a general theory of innovation. In so doing, he brings together the mechanisms of innovation found in biological evolution, ecosystems, cities, and individuals. For him, innovation is understood in the “broadest possible phrasing—good ideas” (21).  He focuses on similarities in how different systems generate, refine, adapt and develop these “good ideas,” largely understood as novel and useful combinations of ideas and information. Reviews and discussions of Johnson’s popular book can be found in a range of places (the Los Angeles Times, The Independent, and even Bill Gates’ blog); our goal here is to briefly present Johnson’s ideas and apply them to the design of learning technologies that could better foster innovation.

A central component of Johnson’s theory about the origin of innovation is the “adjacent possible.”  The adjacent possible pertains to the types of ideas or bits of information that are “out there” and available, but have not quite been brought together. This can be applied to something like the types of compounds, elements, and potential energy that were available in the primordial soup, just before the right ones got together to form amino acids and RNA. It also applies to the geographically distributed bursts of simultaneous scientific or technical insight such as calculus, oxygen, and evolution. For  Johnson, the “adjacent possible” explains why Babbage’s idea for an analytic  engine, an early design for a programmable computer, languished for nearly a century before the technology for computers could take off, and how after such a long gestation, the innovation around computing continues to grow exponentially. In the 19th century, Babbage could conceive of such a device made of gears and switches, but without things like vacuum tubes and circuits, he didn’t have the components that would make computing possible. In Johnson’s terms, the computer didn’t come into the “adjacent possible” until a series of other innovations resulted in expanding the possibilities for the computer.

Johnson describes the adjacent possible as “a kind of shadow future, hovering on the edges of the present state of things, a map of all the ways in which the present can reinvent itself” (31). Both the history of evolution and human culture can be thought of as a “gradual but relentless probing of the adjacent possible” (33).  For Johnson this is the crux of defining innovation: the process by which different ideas are shuffled and mixed to combine with each other and explore ever expanding new possible connections.

So how does a potential innovator go about probing these adjacent possibles? For Johnson, “liquid networks” are the key. To illustrate a liquid network, Johnson once again begins at the very beginning of innovation on Earth, in the prebiotic stew where we find carbon atoms available to connect and create long chains of molecules and attach to many other elements and polyatomic ions.  The situation presents frequent opportunities for mixing and sharing until eventually we find molecules that can replicate. Innovation happens when ideas can rapidly make different connections, and those ideas are forced to mix around with each other as much as possible to insure that very different kinds of connections happen. For  Johnson, the opportunities for connections in the primordial stew have a great deal in common with the kinds of exchange that happen in various cultural settings. For example, the coffee houses and salons of 17th and 18th century Paris similarly facilitated the mixing, mingling, and replication of ideas. The book is filled with these kinds of sweeping summaries and comparisons of everything from cells to historical vignettes.  Undoubtedly, Johnson’s brief treatment of different topics results in a loss of the nuance that makes each of these topics radically different from each other. Specialists on each of these topics will undoubtedly uncover uncomfortable over-simplifications in Johnson’s treatment of each subject. Still, the connections Johnson focuses on are compelling. In juxtaposing and mixing ideas from very different contexts, the structure of the book models Johnson’s idea of innovation.

Throughout the book, Johnson discusses various technologies that facilitate probing the adjacent possible. For instance, Johnson uses the software application DEVONthink to keep all of his thoughts and sources together in one database.  When he queries the database, he notes that he discovers somewhat serendipitous connections. Given that the particular focus of this review is on technologies and infrastructures, it is worth quoting his reflections on this at length:

Several years ago, I was working on a book about cholera in London and queried DEVONthink for information about Victorian sewage systems. Because the software had detected that the word “waste” is often used alongside “sewage,” it directed me to a quote that explained the way bones evolved in vertebrate bodies; namely, by repurposing the calcium waste products created by metabolism of cells. At first glance that might seem like an errant result, but it sent me off on a long and fruitful tangent into the way complex systems—whether cities or bodies—find productive uses for the waste they create. That idea became a central organizing theme for one of the chapters in the book. (114-115)

The DEVONthink software served as an instrument for “private serendipity.” The seemingly errant result was based in a relationship that Johnson hadn’t imagined, and the result was a new take on the issue. These serendipitous connections can be extended to buildings and their architecture. He describes about how Microsoft designed its “Building 99” as a reconfigurable space, “a space that sees information spillover as a feature not a flaw. It is designed to leak.”  He also describes the Johns Hopkins University’s Applied Physics Laboratory, which facilitated interdisciplinary collaboration and resulted in technologies such as the global positioning system (183).  Similarly, he describes how MIT’s Building 20 was intended to be a temporary structure not assigned to any one school or department. It always seemed to have room for those who couldn’t find room for research elsewhere, and as a result, it housed Noam Chomsky’s linguistics department, Bose Acoustics, and the Digital Equipment Corporation (63). Being built on the cheap, its tenants happily punched holes in walls, rearranged their physical spaces, and interacted with one and another in ways that would have been impossible in traditional academic buildings whose rigid and compartmentalized designs act to reify the intellectual boundaries between individuals and departments. Within the solid building, scholars and students created liquid networks and expanded their access to the cross-pollination  of their ideas and work.

Questions to Ask of Learning Technologies and Educational Systems

This was a highly engaging and readable book and certainly one that has considerable potential application for a range of fields. With that said, it’s not an academic work; it reads like a popular “big idea” business book. It has the cadence and exuberance of a TED talk. The book’s strength is found in the similarities and comparisons Johnson draws between things as radically different as cell, coffee houses and urban design. The model Johnson synthesizes suggests a few different questions that can be asked of learning technologies:

Alongside these questions to ask of learning technologies, it is important to unpack the notion of “good ideas.” To what end is any set of “good ideas” good for? Consider ongoing discussion of Massively Open Online Courses (MOOC). One could easily take Johnson’s ideas as an argument for how MOOC platforms (like Coursera and Udacity) are innovative models for learning technology. These platforms are clearly innovative. Coursera’s and Udacity’s platforms enable educators to create online courses that can reach massive numbers of learners around the world. At the same time, as institutions of higher learning move to consider using these platforms as replacements for existing infrastructure for learning, there are legitimate questions to ask about “the good” MOOCs offer. While efficiency measures, like teaching more students, could be one notion of “the good,” it is critical to remember other conceptions of “the good,” such as equity and quality. It’s important to remember that evolution, one of Johnson’s central metaphors, is strictly about adaptation to an environment irrespective of any progressive notion.  That is, there is no such thing as devolution; it doesn’t matter if an adaptation is more or less sophisticated as long as the organism adapts to its surroundings. As we make decisions about the kinds of technologies, platforms and infrastructure we want to create for education, we need to recognize that the good ideas of any particular innovation could adapt us to circumstances at odds with the values and good that our institutions aspire to.

Keeping in mind that it’s important to ask who exactly a given set of good ideas is good for, we found Where Good Ideas Come From to be a thoughtful book, one that has considerable potential value for thinking about the kinds of technologies and infrastructures we can build for learning.

Trevor Owens is a Digital Archivist with the National Digital Information Infrastructure and Preservation Program (NDIIPP) in the Office of Strategic Initiatives at theLibrary of Congress. At the Library of Congress, he works on the open source Viewsharecultural heritage collection visualization tool, as a member of the communications team, and as the co-chair for the National Digital Stewardship Alliance’s Infrastructure working group. Before joining the Library of Congress he was the community lead for the Zotero project at theCenter for History and New Media and before that managed outreach for the Games, Learning, and Society Conference. Trevor is also finishing a PhD in social science research methods and educational technology in theGraduate School of Education atGeorge Mason University. Trevor’s research focuses on learning and knowledge in online communities, video games and culture, and software tools for humanities scholarship. His training is in the history of science, digital history and research methods in the social sciences.

Marjee Chmiel is the educational technology specialist for the Smithsonian Science Education Center, where she is leading digital strategy for her unit and collaborating and consulting on digital initiatives pan-institutionally. She is defending her doctoral dissertation in educational technology and science education in June 2013 at George Mason University’s College of Education and Human Development. Formerly, Marjee was director of digital media at National Geographic’s JASON project where she designed and produced several award-winning science education games. Prior to that work, Marjee was an associate director of instructional design at Public Broadcasting Services, and is one of the founding members of Games and Learning in Society. Marjee has taught science education methods at the graduate and undergraduate level and has worked as a science teacher and technology administrator in public schools.

Previous: How Could You Let That Happen?: Student Expectations for Blog Monitoring
Next: Strategic Google Forms Biographies for Large-Group Classes