A writing assignment based upon a hypothetical situation resonates with students’ intuitions and experiences once a digital component is added.

The composition curriculum at Miami University of Ohio allows for the writing of a researched local argument instead of a traditional research paper. I was excited to assign a project that addressed a hypothetical situation: if your town or county government came into a large, undesignated surplus of money, how would you advocate for them to spend it? My students groaned and seemed uninspired when I casually informed them about it. Several noted that they “didn’t know” anything about local government, “didn’t care” about politics, and were generally satisfied with the communities in which they lived. The chance for them to advocate didn’t inspire anything inside of them, and I concluded that they needed a sense of what local government was and how it could impact their lives before they would engage with the assignment.

Here, the term “exigence,” which I use to mean the reason for acting, became important: researched local arguments gain much of their stylistic power and strong content from the interest of the writer, even if the paper is not written in the first person. I wanted to create an invention step for the students that helped them come up with potential topics by getting to know what issues local government addressed in the first place. I developed an assignment that I called “The Virtual Town Hall Meeting” in which students spent a single class learning about how people advocate for themselves in local government.

The class began with relatable clips from the beginning of the series Parks and Recreation, where a humorous clip shows a very excited parks department employee running a dysfunctional but funny town hall meeting.

The students recognized the show and began to mention things about local government that they had actually heard of before. I then explained that using a collaborative document in Google Drive, they would spend the remainder of the class both learning what local government was and what aspects of local government would be worth their further research. The research would hopefully show them what aspects of government as a whole are controlled at a local level, where social change is comparatively easy when discussed in relation to federal or state government issues. This research would be the first step toward having opinions and making arguments in the local government sphere, a path I hoped would model an informed method of writing rather than writing based on generalities or vague opinions.

The first question they each worked on in the virtual town hall meeting document was simply, “What is the role of local government?” As they thought of their own definitions, they were working in real time with their classmates, both creating some cross talk in the document and some out-loud discussion. When they found themselves dissatisfied with their own prior knowledge of local government, I moved them to the second question within the same Google Document: “What would you like to know about local government? What questions would you ask?” Their questions then guided an effort to discover some of these solutions, which were not particularly serious–they wanted a puppy rental service, and someone to do something about the deer infestations in our town. They did eventually start to figure out some of the questions they might ask of government, including how new recreation activities are launched in towns, as well as who the leaders of the community were and what they were doing to make the town a better place. The brainstorming was not focused, but it was engaged.

In order to give them more ideas for the kinds of questions that citizens ask of their local governments, I had them play a game online called “Counties Work” created by the non-profit democracy education project iCivics. This is a Sim-City-like game where as a town councilperson you attempt to make as many citizens happy as possible while not overtaxing them or overspending their money. Though the game has rudimentary graphics, it is well designed and easily playable in 10-15 minutes, making it ideal for the classroom environment. The citizens who pop up with ideas or complaints for their town councilperson helped my students envision the way a town government would function, and the various departments to which they could assign each project allowed them to realize what kinds of services the town government generally oversees. 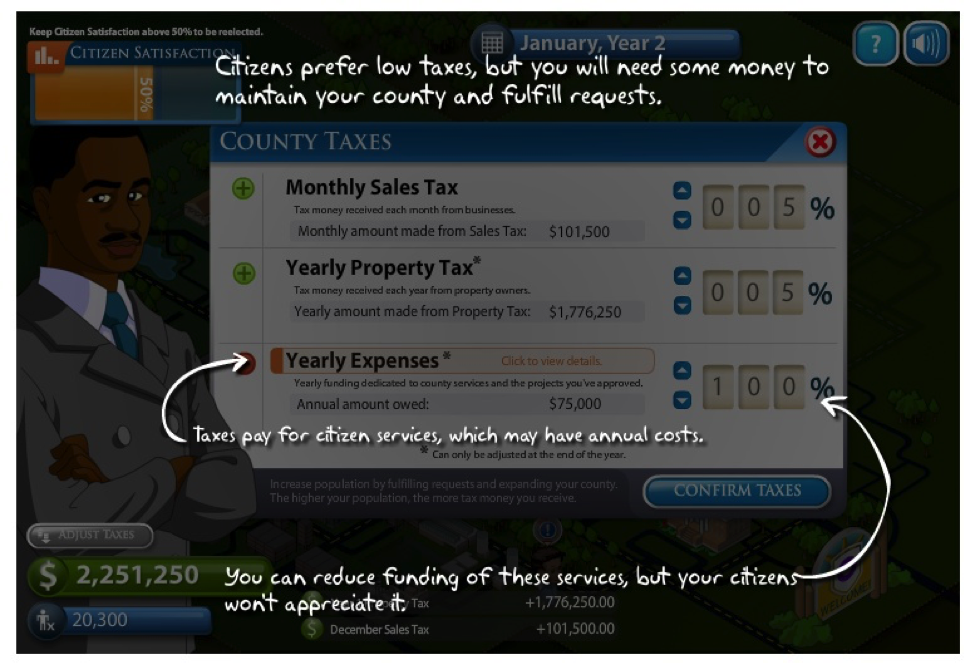 Counties Work allows you to change taxes in order to either increase revenue or increase the amount of satisfied citizens. 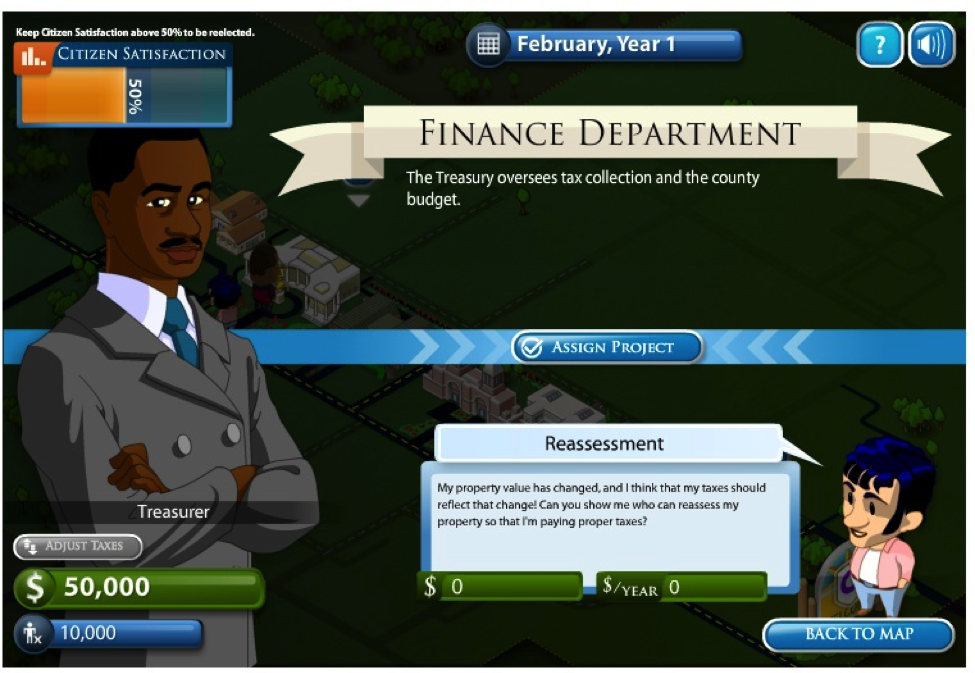 When a citizen comes to you requesting help reassessing property value, you can assign the project to the appropriate department, Finance. 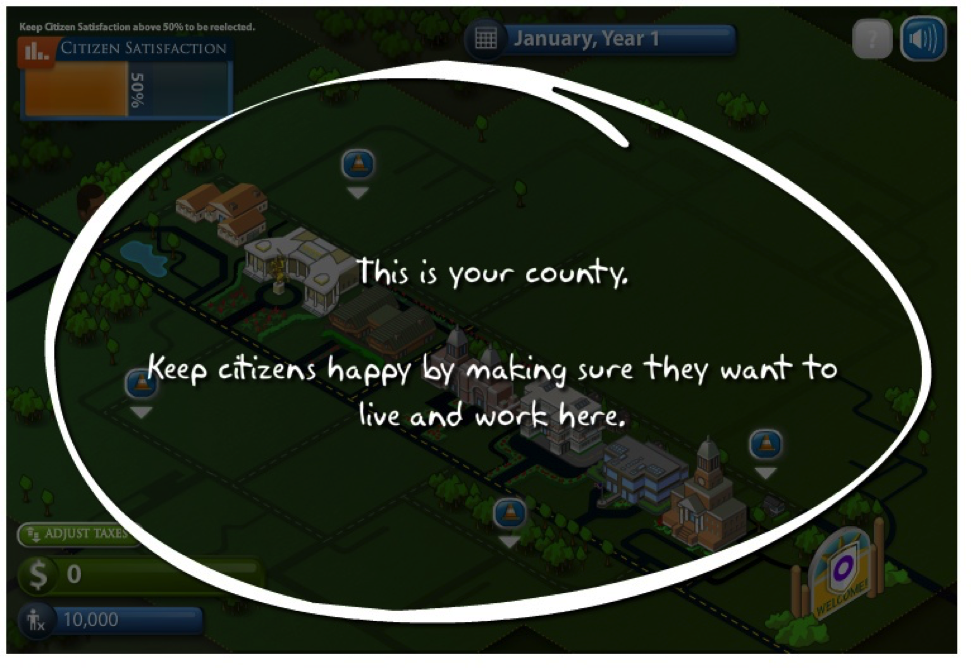 The interface of the Counties Work game makes it clear what issues are handled by local governments. 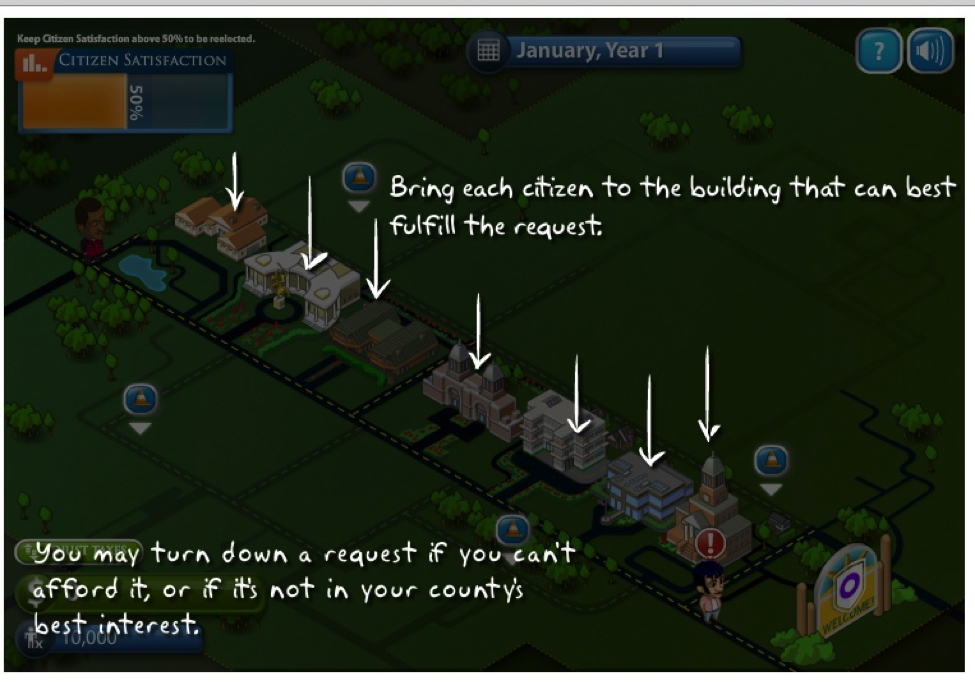 The interface of the Counties Work game makes it clear what issues are handled by local governments.

Counties Work exaggerates many real-world situations, but the situations are still reminiscent of real issues facing local government. The students are both entertained by zany scenarios (dealing with a citizen who wants to make a museum of themselves) and challenged by real situations (a citizen doesn’t know what local taxes apply to them and need more information). All the while, the students also must decide between varied reasonable and interesting proposals for spending, based on the budget they generate in their growing or shrinking tax base.

When they finished a single “term,” whether they ‘won’ or ‘lost’ the game (whether they were reelected or not, based on citizen satisfaction) they all reflected on the problems that resonated with them the most, the projects that they thought were most worthy of government intervention. I hoped that by first addressing the game itself, they would be able to transfer the most useful projects in the game and apply them to aspects of their own towns and cities that might need improvement in some way. While this didn’t create exigence, it was an opportunity to reveal a need in the students’ communities that didn’t originally occur to them when I mentioned a researched public argument. Many of them realized that there were a lot of issues that didn’t need to be politicized in local government, and when the question was whether or not to build a new park rather than whether to vote Republican or Democrat, the students were less polarized in their opinions. Taking some of the nation-wide partisan issues out of the idea of ‘government arguments’ really freed them up to feel less threatened by political ramifications. While the students hadn’t mentioned specifics in their earlier work, they had mentioned being generally uninterested in government and politics, which they lumped together. While a few of them discussed a general desire to have a smaller government in the initial activities, the students did not share this same concern in their final reflections on local government, usually citing how practical and important the services were when they got some concrete examples.

Before the next class meeting, students interviewed family members and friends about the issues in local government that mattered to them. The class then spent time with good old fashioned colored pencils and paper, making lists: on the left side of a piece of paper of their interests and their families’ and friends’ concerns, and on the right side of the paper listing all the departments in the local government as shown in Counties Work. They then drew lines between the ideas that might connect their interests with local government’s responsibilities and discussed how to formulate a research question based on the issues that mattered to them. 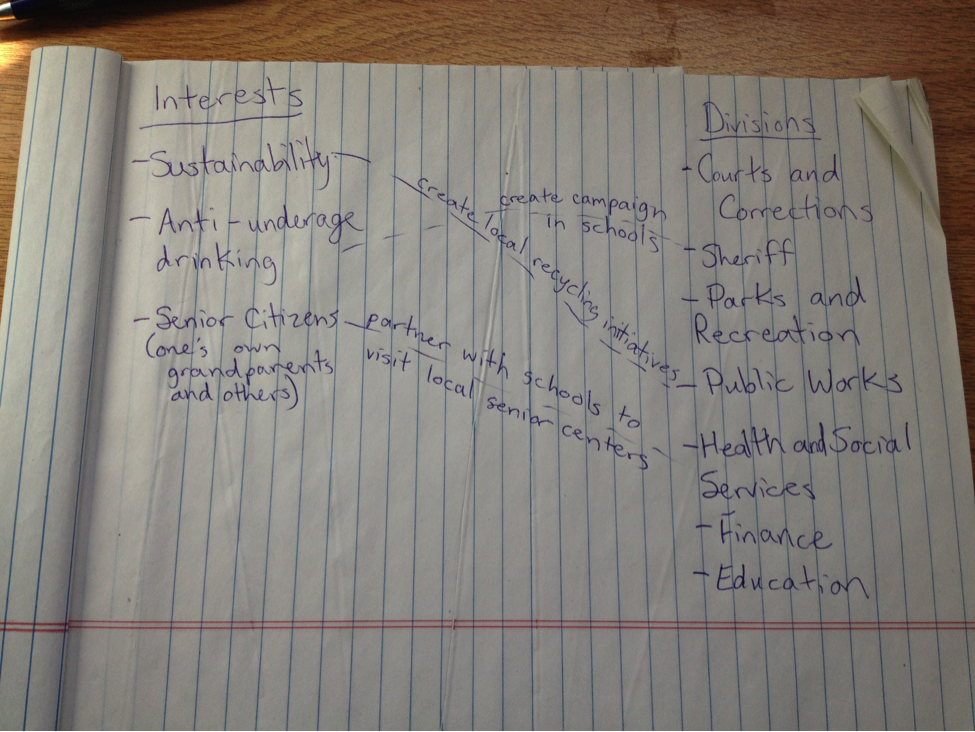 This is a sample of a student’s diagram connecting their own interests with the branches of local government discussed in the Counties Work online game.

Completing the assignment also required strong information literacy skills, since many of their forms of research were not traditional journal articles (or were journal articles on topics that were well outside my own knowledge base, including articles on how investing in tourism impacts town centers and the most effective ways to salt roads to prevent ice) and they also incorporated some personal interviews and data that came from a variety of informational websites. While the process of teaching a research paper was relatively unchanged in the discussions of how to cite correctly, how to incorporate sources into the flow of their writing, and how to revise based on peer feedback, the students remained more interested in the project because all the students expressed at one point or another how they were writing about something that they believed could have an impact on their hometown or college town. While an essay on a hot-button issue in the national political arena can be well written and well researched, it is rare that such an essay is of use because so much has already been said on the topic. However, one of my students wrote a proposal for creating a section of his small town’s community center for active video games, using the latest research on how these video games improve cognitive ability and physical activity; this is a proposal that was both locally rooted and so specific that it is unlikely that it has been presented before. My belief is that beginning with extensive brainstorming and investigation of potential exigencies for this assignment helped students gravitate both toward topics that interested them more, and thus made them exert more effort, but which also were more specific and thus created a larger potential utility for the final products from this class. While I didn’t require the students to submit their proposals anywhere, I asked them to use their reflective letter, submitted alongside the essay, to discuss how they believed their proposals could make changes in local government and who would have to read them in order for that change to happen.

Laura Tabor is the Writing Center Director at Earlham College in Richmond, Indiana. She studies community engagement as well as student motivation and mindfulness in writing classes.

Share this article
Previous: YouDescribe: Testing Crowd-sourced Video Description for Service Learning at the City University of New York
Next: Spreading Awareness of Digital Preservation and Copyright via Omeka-based Projects