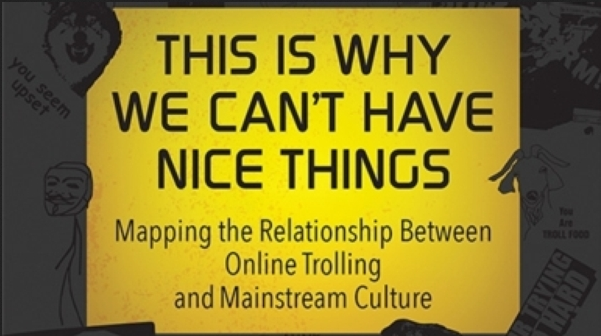 Review of This Is Why We Can’t Have Nice Things: Mapping the Relationship between Online Trolling and Mainstream Culture by Whitney Phillips (Cambridge, MA: The MIT Press, 2015). $24.95 hardcover, $17.95 e-book.

Reading This Is Why We Can’t Have Nice Things: Mapping the Relationship between Online Trolling and Mainstream Culture, I realized why the statement “don’t feed the trolls” is damaging advice for people who are confronted with a hostile discussion climate and harassment on digital communication platforms. The book, which is named after a famous Internet meme, calls for more distinct definitions of provocative communication practices online. The monograph complicates ideas about aggressive online behavior by examining the thin line between trolling and mainstream culture.

The term trolling originated on online platforms and image boards such as 4chan’s infamous /b/-board, where users engaged in a form of particularly referential, exploitive and offensive humor. For the sake of Lulz–a tokenized modification of the acronym lol (“laugh out loud”)–trolls celebrate the frustration, anger, and shame experienced by a victim of an offensive joke. The term “trolling” has since changed to describe hateful commenting and harassment on mainstream digital platforms such as Facebook or Twitter.

Currently working as a lecturer in the Department of Communication at Humboldt State University, Whitney Phillips spent hours in the Internet’s dark corners of the online community 4chan and argues that trolling mirrors the media’s practices of exploitation and sensationalist news coverage. According to her research, trolls act on the same cultural logic. While corporate news media perpetuate racial and gender stereotypes for the sake of easy profit, the overt racism and sexism of trolling is an online manifestation of a larger problem related to Western cultural logics of domination through aggressive behavior. The origins of the antagonistic behavior of trolls are embedded in the communication patterns of a media that rewards dominant behavior and is based on exploitation for the sake of views, clicks, and profit.  For pedagogy and teaching, the question arises how trolling can influence students’ behavior and expose them to aggression when doing research. The book is thus a worthwhile read for teachers, academics, and users who want to understand what is really at stake when a person is “just trolling” and how to prepare students to communicate on social media platforms where trolling occurs.

Structured in chronological order, the book follows the development of trolling from a niche phenomenon to a mainstream communication practice. The first part of the book describes the trend of subcultural trolling—the creation of offensive memes and often highly elaborate jokes—which emerged during the early years of infamous communities and boards in the early 2000s. In the second part, Philips analyzes trolling between 2008-2011, when the so-called “anons”– tech-savvy users of 4chan–engaged in humor nurtured by outspoken, violent misogyny and xenophobia. The third part of the book describes the time between 2012 and 2015, when the advertising industry capitalized from the humor of meme culture. At the same time, hostile discussion practices entered mainstream Internet culture by referring to Internet meme and making use of the same kind of humor.

Phenomena like gender trolling, in which women are confronted with particularly aggressive forms of harassment online, show that trolling is at the same time the basis and manifestation of privilege. In addition, people from racial and sexual minorities are often targeted by identity-based harassment. Phillips argues that the most pervasive form of white androcentrism stemming from the “Internet hate machines” lies in the adaptation of an antagonistic discussion method, where male-gendered traits like rationality and dominance are valued over characteristics of cooperation or emotionality. As such, the members of the online platforms reify their androcentric worldview and delegitimize critique.

The historical analysis of trolling complicates simple ideas of freedom of expression on online communication platforms that are used often in teaching. Phillips analyzes trolling as the entitlement for actively engaging in harassing or irritating behavior in the context of early Internet- and Hacking ideology. Early users of the Internet were encouraged by an expansionist ideal to take full advantage of the technological possibilities at their hands. The increasing participation of different social groups on the platforms led to an idiosyncratic and self-serving interpretation of the freedom of speech by users belonging to the social majority.

Phillips describes how calling a particular behavior trolling became an “all-encompassing term for being an ass on the Internet.” (Phillips, 153 ) This blurriness is highly problematic. Pragmatic legal solutions and interventions become difficult to enforce due to the different circumstances and the various forms of trolling. For example, prohibiting anonymity will not stop trolling, but endanger users who rely on anonymity for their political and personal safety.

The book draws from theoretical frameworks such as Judith Butler’s concept of hate speech, and Henry Jenkins’ ideas of convergence and “stickiness” of media content. I was particularly delighted about the deconstruction of early Internet and Hacking ideology, and how it relates to white entitlement and privilege. Yet, I missed a concise outline of the theoretical framework and a justification on why the specific authors are chosen for the analysis.

Phillips demonstrates that trolling is not a surprising phenomenon of contemporary Internet culture, but rather a continuation of pervasive practices.

While the book is by no means apologetic about the overall negative dynamics of trolling culture, I could not help but chuckle about the ingenuity of some of the early trolls’ actions, who mainly hoaxed Fox news and other media pundits. According to the author, anonymity appears less important for communication online than existing group dynamics of latent racism, homophobia or racism that influence the discussion.  She thus calls for a more differentiated approach to regulate the phenomenon that ranges from viral Schadenfreude to harassment. The author’s solid understanding of the specific nuances of trolling is the shining asset of the book. Chapters named “Dicks Everywhere: The Cultural Logics of Trolling” (Phillips) prove that Phillips understands the very cultural and social dynamics she portrays and shares with the reader.

As a qualitative analysis, the book brings together folklore studies, media studies, and ethnographic research. It thus offers only limited solutions for intervention and legislation in contemporary Internet culture. Phillips’s historical focus on subcultural trolling on infamous image boards explains key dynamics of trolling, but trolling has changed significantly since she first discovered 4chan in 2007 and handed in her dissertation in 2012. For This is Why We Can’t Have Nice Things, she used insights from her dissertation project, and so the book exemplifies another challenge faced in cultural analysis and ethnology of online media. Focusing on “moving targets,” the author had to rewrite the analysis repeatedly since trolling underwent a major shift. For instance, the activist group Anonymous, which has its origins on 4chan, has by now become a political group that has gained far-reaching influence outside of the world of image boards and comment sections. For students and teachers in digital media, the rapid speed of online development is an essential point to consider when seeking objects of study on the Internet.

The dynamics of online culture are in constant flux, and the time of academic publishing posed an obstacle to publishing timely analysis. Phillips, however, succeeds in presenting the timelessness of the problem of a media culture based on exploitation. By 2016, stating that a person is “just trolling” has become an excuse for myriad forms of offensive behavior on online platforms. Trolling has arrived in mainstream culture and continues to perpetuate a hostile climate in which people from marginalized communities are too intimidated to assert their position.

The implications of trolling for teaching are thus complex. Do parents and teachers risk exposing students to trolls when they are sent to the Internet for reasons of education?  The role of a teacher as educator here can be to encourage the students to speak out, and become aware of the climate on platforms. Students should be encouraged to speak their opinion and do research, while at the same time it is necessary for them to be protected from harassment. Thus, the adage “don’t feed the trolls,” blames the victims for being outspoken. Being dragged into harassment is considered a consequence of the victim’s action, which is blamed for daring to speak an opinion or not fitting into the norm. Since life, social discourse, and political discussion happens on online platforms, the logic of avoiding trolls ultimately means to submit to the mainstream voice, and remaining on the margins of society.

It is easy to blame anonymous trolls on the Internet, but “the reason why we can’t have nice things” must be sought in mainstream culture. The work for pedagogy thus does not consist of simply teaching students to avoid trolls, but rather to critique both the trolls and the institutions and culture in which trollish behavior is rewarded.

Elisabeth Giesemann is a graduate student in North American Studies at Free University Berlin.
She is interested in the Digital Humanities and Media Studies, particularly in the representation of race and gender in digital media and popular music. She worked as a music journalist and at a music software company in Berlin.

Share this article
Previous: At Last, a Good, Long Look at Open Access for the Humanities
Next: How I learned how to Stop Worrying and Pickle Websites: The Art of Fermenting the Web with Archive-It and Webrecorder

'Privilege in the Comment Sections: Online Trolling and the Mainstream Media' has no comments