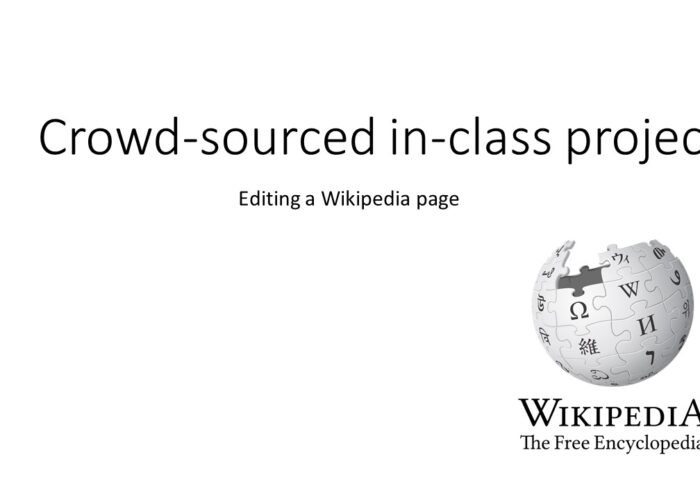 When Wikipedia Fought Back

In this short essay, the author explains what went wrong when he asked his students to tackle an ill-conceived project—an in-class Wikipedia edit—and what he’d do differently next time.

In the fall of 2018, at my last institution, a smaller, teaching-focused university in the Pacific Northwest, I tried—and failed—to use Wikipedia in my survey of digital media course.

The assignment? I urged my students to attempt to edit our institution’s entry on Wikipedia. I had them first read Wikipedia’s own “simple” rules for editing entries (though these by no means are necessarily user-friendly or transparent to beginners, in retrospect). With these rules in mind, I tried to offer some guidance, and we spent the first twenty or so minutes of class creating profiles and discussing how, exactly, to add text, images, and links to Wikipedia entries. It was part of a larger unit on wikis and collaborative digital tools. I was excited. I figured that even if we just succeeded in adding some small bits of information to the page, that would be a success. Students, however, were technically going to be graded on a self-reflection forum post afterward, so it was not necessary that they “succeed” at the process. That helped lower the stakes, but provided enough motivation for students to at least attempt the assignment.

Like many of my colleagues, I had the best of intentions. I was going to lean in, darn it, to my students’ own learning habits (Wineburg 2018). Inspired by scholar-teachers smarter and savvier than I, I was going to have one of those collective “a-ha!” moments we all yearn for, when, in the silence of an air-conditioned, sun-lit space, the scent of marker lingering in the air, you turn, excitedly, from the whiteboard to gaze upon the newly enlightened faces of your students, who burst into applause.

That did not happen.

As I planned the in-class exercise the night before class, I realized too late that we might get pushback from Wikipedia’s infamously irascible and mysterious volunteer editors (Dougherty and O’Donnell 2015).

“But we’re just adding some innocuous info,” I thought—details like the names of buildings and programs. “What’s the worst that could happen?”

I soon learned, about 25 minutes into the whole affair, that, in fact, a great deal can go horribly wrong when you forget that the thing you’re toying with in real time—in our case, again, our university’s Wikipedia page—can fight back. Wikipedia, my friends, is very much alive.

It started innocently enough. One of my more engaged students raised her hand.

“Umm, Dr. Mari, I think Wikipedia doesn’t like how we’re all in this page editing it together right now.”

I strode over—surely, of all the pages in the wide world of Wikipedia, ours wouldn’t have some kind of odd editing cap on it, right?

And sure enough, things continued well enough for a bit. My students added some benign, or so I thought, facts about our volleyball team, the names of our new degree programs, some of our campus ground’s highlights, and so on.

But then, one mischievous student decided to get a little… silly.

“What if I just make up something dumb and put it in here?” he asked me.

“Well, what if I add myself to the list of famous alumni?”

I thought about this for a second. On the one hand, I didn’t want to encourage the accumulation of garbage information in the world and turn my class into a fake news farm. I’d rather not become the subject of a cautionary tale in a journal somewhere.

But… we had just talked about how Wikipedia has a strong internal editing culture—as controversial and problematic as it can be—and I did want to show the students, instead of just prattling on about it.[2] I pushed aside the voice in my head that was saying, “wait a second here, sir.”

“Sure,” I said instead. “Try it and see what happens.”

And so he added his name, and the names of a few friends, for good measure. Within moments, it was deleted. I pulled up the editing log—a veteran Wikipedia volunteer editor, working under a pseudonym, had already corrected the record.

“There, everyone,” I pointed to the projected screen behind me, “just like I told you. This isn’t the Wikipedia of my time as an undergrad, a decade ago. Things have changed for the better and this engagement is part of why Wikipedia…” (see Ayers et al. 2008).

“Maybe this thing is working after all,” I thought, perhaps a touch too proudly. “Maybe I’m pretty good at this.”

My students’ careful and fact-based links, edits, and other changes were being erased and wiped clean, in rapid succession, by the original editor, but also now by several others. The word must have gotten out: we didn’t stand a chance!

We still had more than half of class left to go. But within minutes, all my poor students’ work was gone, vanished. They looked up, over the edges of their phones, laptops, and tablets.

They were not pleased.

I took great pains to try to connect what had just happened with our reading from the week, which had included articles both critical and supportive of Wikipedia and its potential as a kind of refuge, a stronghold of fact-checked information, and some of the irony of that.

I am not always fast on my feet with this kind of extemporaneous pedagogy. I have a stutter, and often need my slides and notes to guide me, as I talk fast and mumble more the more nervous I get, especially in front of twenty skeptical students. There’s almost always something else I wish I had said or added after these kinds of moments when teaching, especially with digital tools. I often write long notes afterward via email or post to our class page, debriefing disastrous assignments.

But in the moment, I just… sort of embraced the “successful failure,” to borrow from our friends at NASA (Leinfelder 2020).

I stopped talking. My students had questions: would they still get credit? Even though all their edits had been erased? What were we going to do now?

“Yes,” I told them, “you’ll get credit. We can talk more about this next time.”

Then I ended class early, thinking hard about power dynamics and hidden infrastructures and black boxes (Jemielniak 2015). In this case, “black boxes” are unexamined, taken-for-granted technologies that are not well understood outside of small circles of experts (Anderson and Kreiss 2013). Wikipedia has come a long way, and I need to be more thoughtful about how I unpack it, contextualize it in time and culture (Cummings 2009; Jemielniak 2015), and contrast it with other “legacy” sites such as Craigslist and Reddit (Lingel 2020, Lagorio-Chafkin, 2018). Wikipedia is not so easy to use as a teaching tool. I need to be less so-sure of myself.

But I think it worked out OK, for a first attempt working through an exercise like this with students. Later, on their course evals, at least one of my students mentioned that day as one of their favorites, because it made them think about the people behind the software curtain. That helped, but now I know—Wikipedia can fight back. Watch out!

I’ll be ready next time. And for next time, I’ll be more mindful of the power of “black boxes” that are a heady mixture of software and hardware, people and intention, momentum and gatekeeping. I will equip my students to better face these hurdles—and overcome them—by reading more critical accounts of the site and how it works.

Maybe we’ll write an entry about it, while we’re at it.

[1] Students’ names have been changed for the purposes of this essay.
[2] And as an avid fan of Stephen Colbert, I had enjoyed watching what happened when his team edited entries in the late aughts for fun—and to make a point: https://en.wikipedia.org/wiki/Wikipedia:Wikiality_and_Other_Tripling_Elephants.

Ayers, Phoebe, Charles Matthews, and Ben Yates. 2008. How Wikipedia Works: And How You Can Be a Part of It. San Francisco: No Starch Press.

Lagorio-Chafkin, Christine. 2018. We Are the Nerds: The Birth and Tumultuous Life of Reddit, the Internet’s Culture Laboratory. New York: Hachette Books.

Lingel, Jessa. 2020. An Internet for the People: The Politics and Promise of Craigslist. Princeton: Princeton University Press.

Will Mari is now an assistant professor at the Manship School of Mass Communication at Louisiana State University, where he teaches media law and media history and continues to research the history of technology and news work.