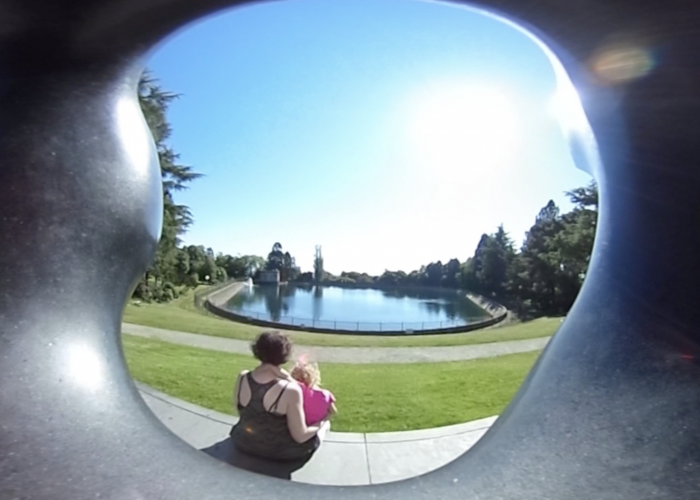 This short 360-degree documentary traces the history of Seattle’s Olmsted-designed Volunteer Park through the eyes of one of its regular users.

For scholars of architectural and urban history, 360-degree video offers an innovative and immersive means of sharing research about physical spaces with global audiences. Created using a camera with two or more lenses that essentially record in every direction at once, this new format displays as a visual sphere that users can rotate spontaneously in order to take in different views while the video plays. The viewer’s vantage point is from the center of this sphere, so that rotating the view feels like turning one’s head or body to look in different directions. Because of this quality, physical space—and human beings’ relationship to it—is not simply a feature, but a generative principle of the visual experience of 360-degree video, making it especially promising for art and architectural historians who work on issues of space and place. Immersive representations of far-flung locales have long been a part of the practice of art history, especially as a means of presenting research to the public—even if such representations have often been more “popular” than “scholarly.” In the nineteenth and early twentieth centuries, for instance, painted panoramas allowed middle-class viewers to experience the archaeological and art-historical documentation of faraway places. The invention of film added the possibility of witnessing such distant places in motion, but the medium did not become truly “immersive” until the mid-twentieth century, when the Cinerama, IMAX, and OMNIMAX film technologies began to use enormous, curved screens and high resolution to give viewers the sense of being physically surrounded by the film. More recently, urban documentarians like Jonas Bendiksen (The Places We Live, 2008), Katerina Cizek (The Highrise Project, 2009-present), and Kolja Mensing and Florian Thalhofer (13ter Stock, 2005, and 13ter Shop, 2007) have adeptly combined audio, video, and 3D photography within proprietary, web-based interfaces to provide viewers with intimate experiences of particular spaces and their inhabitants. And over the last couple of years, the Google Cultural Institute and Google Street View have incorporated many 180- and 360-degree videos and images into their repositories.

360-degree video operates not only visually and aurally but also kinesthetically, offering the viewer an “embodied” experience in which the sensorium has the potential to become more keenly engaged than it might be with more traditional media (Millar 2016). While it is tempting to argue that this dimension makes the medium more impactful, we should also remain critical of such messianic claims (see, for instance, Hansen 2006 and Hillis 1999). 360-degree video is still essentially a linear, cinematic format that utilizes established storytelling methods, and after the initial novelty wears off for a given viewer, it may ultimately be consumed just as passively as other traditional media. Like earlier immersive experiences such as panoramas, it also risks becoming a spectacle whose appeal lies more in its technical achievements than its intellectual content.

More positively, the technical characteristics of 360-degree video force us, as producers and scholars, to reconsider our traditional relationships to authorship critically. Since the camera shoots everything within its spherical range of vision—including the cameraperson—it is much more difficult to remain aloof and hidden behind the camera, as we easily do when shooting traditional video or still photography. Academics typically shy away from the media spotlight: many of us prefer to remain comfortably masked as names attached to text. It is possible to shoot 360-degree videos without being seen by the camera, but it necessitates leaving the camera by itself for the duration of the shot—a risky undertaking in public spaces. The medium therefore seems to require us to be physically present within our work, which forces us to take on the role of public intellectual, and has the added benefit of lending the videos a sense of human presence and scale.

Today, thanks to the availability of affordable software and accessible platforms like YouTube and Vimeo, individual scholars have the opportunity to create and share high-quality videos without the financial and technical hurdles that used to accompany technologies like IMAX.[1] However, it is still a challenge to do so. Good video and audio take time and practice to produce, and technical problem-solving takes patience. Even if the technologies themselves are somewhat simple, conceptual approaches to storytelling with video involve a steep learning curve. As exemplified by this special issue of The Journal of Interactive Technology and Pedagogy on digital art history, the academy and art institutions are starting to recognize the value of these formats, and hopefully this shift will encourage scholars to invest the same amount of time in mastering these skills as they do in their other writing and research.

This video about Seattle’s Volunteer Park, designed by Frederick Law Olmstead (1822–1903), is an attempt to harness some of the possibilities of 360-degree video for public scholarship. Using an intimate, personal storytelling voice-over format adapted from radio, I use my own bodily experience of the park (which, as discussed above, is hard to exclude during filming) to frame a discussion of its design history. 360-degree video provides a sense of physical space that traditional video simply cannot capture and I hope more scholars of space and place will experiment, innovate, and share work in this format.

In order to view the 360 video, you must be using the Chrome, Firefox, MS Edge, or Opera browser. To navigate around the 360-degree sphere, on a desktop computer, use your mouse to either drag the video itself, or use the controls on the upper left of the frame. On a tablet or phone, simply move your device around as if it were a camera.

[1] Beth Harris and Steven Zucker at Smarthistory, for instance, have developed a groundbreaking format for short, conversational YouTube videos about art and architecture that reach millions of learners around the world. The successful podcast series “99% Invisible” has also been a pioneer, using the intimate storytelling format developed by “This American Life” to make rigorous research on urban and architectural themes accessible and engaging. Although wildly popular, both of these projects are produced by tiny teams working on shoestring budgets.

Dr. Naraelle Hohensee holds a Ph.D. in Art History from the Graduate Center of the City University of New York and an M.A. in Media, Culture, and Communication from New York University. Her research, undertaken in tandem with digital media production, has to do with the many ways that our visual surroundings in the everyday urban landscape shape our perception of ourselves as individuals and as members of communities. Her dissertation research was on the rebuilding of central Berlin after 1990. She is currently the Andrew W. Mellon Postdoctoral Fellow at Smarthistory.org.