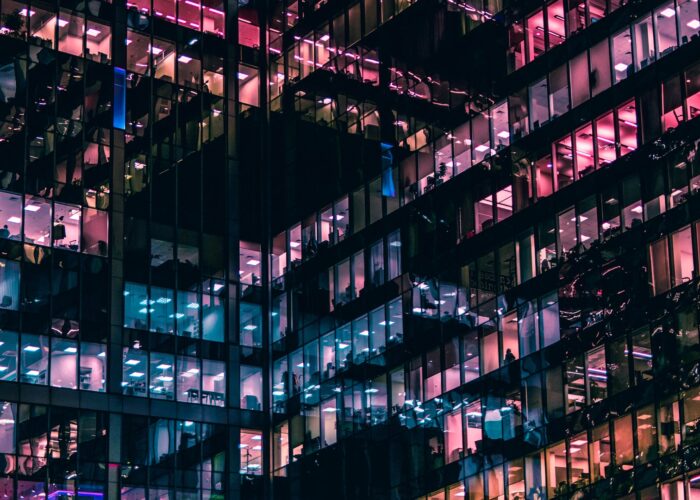 I report on administration surveillance of online courses at CUNY’s School of Professional Studies. Department Chairs and course observers have been given the ability to examine the whole body of work uploaded to the faculty member’s Blackboard site, including grading, student work, and timeliness, in some cases for the entire semester. The bond of trust between faculty and student is also compromised by this third-party scrutiny of potentially personal material. Faculty unions and governance bodies need to identify similar surveillance on their own campuses and demand limitations on constant scrutiny. Unfortunately, students will find it harder to assert privacy rights.

The COVID crisis vastly expanded the number of online courses at the City University of New York, and many of those courses will stay on-line in the future. Faculty, who generally had taught their courses with minimal scrutiny from their supervisors, have had to establish comprehensive Blackboard sites which are potentially open to a high degree of surveillance by Department Chairs and higher-level administrators. Students, who were previously “surveilled” only by their professor, now can be tracked by many others with administrative access. The union which represents both tenure-track and contingent CUNY faculty has been attempting to address that problem, with mixed success. Contractual safeguards were negotiated in 2019, but policing that language across twenty-two campuses and hundreds of academic departments and programs is difficult. Here, I report on one campus which has vastly expanded surveillance, and the efforts of the author and the union he represents to bring those practices to a halt.

The School of Professional Studies is an unusual CUNY campus. Housed on leased floors in two office buildings in midtown Manhattan, the vast majority of its courses have always been taught on-line, almost exclusively by contingent “part-time” faculty with few job security protections.[1] A small number are guaranteed a minimum of two courses a semester for three-year blocks. All the rest are reappointed either yearly or semester-to-semester. Thus, the threat of losing one’s job for any reason (or for no reason) is very present and the dangers inherent in surveillance serve to increase that threat.

Unlike tenure-track faculty, who are also evaluated on their research, publications, and service obligations, the work of contingent “Adjunct” faculty is assessed almost exclusively on the quality of their teaching.[2] At CUNY, in a traditional classroom setting, a contractually stipulated protocol mandates a single classroom observation each semester by a designated observer, followed by a “post-observation conference,” which usually also discusses the overall goals of the course; subsequently, a written report is sent to the Department Chair, who is responsible for hiring and firing. In addition, informal discussions between the Department Chair and Adjunct during the semester might add to the overall evaluation.

But that observation can look quite different in an on-line setting, whether the class is taught “synchronously”—with real-time interactions between faculty and students—or asynchronously, perhaps with taped lectures and certainly a profusion of on-line assignments. That’s because the observer—and potentially, any supervisor or administrator—has the ability to examine the whole body of work uploaded to the faculty member’s Blackboard site. That might include, for example, an entire semester’s lectures, all the assignments, and all test and quiz questions. All responses to student work, grading schemes, speed of grading, assignment grades, the number of students current on their work, falling behind, or failing the course are also evident in perusing a Blackboard site.

My union, the Professional Staff Congress-AFT, fortunately attempted to address the proliferation of on-line teaching before the pandemic. In 2019, contract negotiations with CUNY resulted in protocols for on-line observations. At their heart was the directive that “For teaching observations of online or partially online courses, the parties intend to replicate as closely as possible the longstanding teaching observation practices established pursuant to this Agreement”—that is to prior procedures for in-class observations. More specifically, for synchronous courses, the observer would only have access to the course for the duration of one class period. For asynchronous courses, the observer would be granted 48-hour access. Crucially, in either case, the observer would only have “limited access to the course platform, usually defined as ‘student’ or ‘guest’ access but in no event ‘instructor’ or ‘administrator’ access” (“Memorandum”). That is, the observer could only see what a typical student could see—perhaps that week’s lecture, assignment, and quiz—not the whole semester’s worth of postings. And certainly not all the management of the course, progress of students, or student posts. That all seems clear enough.

This type of contract language seems like a minimum necessary protection of faculty, and should be a standard protocol in all online courses.

This language protects student privacy as well. The students know that the professor has access to their work and no one else. When the observer “enters” the online space, students are informed of the duration of that access and its limitations, just as they are implicitly informed when an observer walks into a physical classroom. When sensitive topics are broached, students should have control over, and knowledge of, whom they are talking to. In a classroom setting, an observer only sees the homework being handed back to students. They shouldn’t be able to read that homework when a class goes on-line.

However, SPS has utilized—in the union’s view, in violation of the contract—two loopholes to enable complete scrutiny and surveillance. First, it has given all observers “Grader” status. SPS has justified this procedure by noting that the only designations specifically prohibited are “Instructor” and “Administrator.” That is true; but “Graders” do not have “limited access.” Rather, they have the same “view” access as instructors themselves; the main difference is only that a Grader cannot change or edit the existing Blackboard posts, or change the course controls. So, an SPS observer of an asynchronous course has forty-eight hours to fully examine every aspect of a Blackboard site. The observer also has the ability to read all student posts or homework, thus breaching the implicit bond of student-faculty trust.

As SPS has itself conceded, there are “more than 40 roles available in Blackboard.” Clearly the contract could not have de-limited them all, or any new ones that Blackboard might unilaterally create between rounds of contract negotiations. But SPS asserts the right to act unilaterally—and, indeed, this is the unfortunate state of labor-management relations in the United States, even when a union contract is in place: management plays offense, the union defense. Because we must now file a contractual grievance and wait (perhaps a year) for a hearing in front of a neutral third party, our proposed remedy is broad. In our grievance, alongside asking for an end to the practice, we assert that SPS has so poisoned the observation process that any firings (or “non-reappointments,” as they are called in the oh-so-polite parlance of academia) are inevitably tainted and must be reversed.[3] Sometime in 2022, we will see if an arbitrator agrees and orders an end to SPS’s overly-ambitious interpretation of the contract language.

Second, and even more pernicious in our view, SPS has granted its Academic Directors (ADs)—the equivalent of Department Chairs—semester-long “Instructor” status. The stated reason is that, in extremis—say, if the faculty member fell deathly ill—an AD might need to communicate with the students directly. That is certainly a worthy goal, easily addressed in the moment of extremity. Instead, the AD can look into the class all semester, without the faculty member—or the students—even knowing when and what is being perused. Forty-eight hours of unlimited monitoring are bad enough; here, the AD can watch the class unfold over the entire semester. Our grievance remedy is thus the same, but this does not address potential harm to students. Everything they write, no matter how confidential the subject matter—sexual orientation, criminal acts as either victim or perpetrator, immigration status, political beliefs, etc.—is now subject to third-party scrutiny. Alternatively, if that potential invasion of privacy is revealed at the beginning of the semester, they may feel the need to limit their speech as a matter of self-protection.

Even with the COVID pandemic on the wane, online classes will likely persist, creating openings for the surveillance of course sites that threaten the academic freedom and contractual rights of faculty (particularly contingent faculty) and potentially violating the privacy rights of students. Addressing these threats will require unions to collectively bargain to obtain strong and clear contractual language regulating the processes of online course observations, and ongoing policing of those safeguards. Meanwhile, faculty must be educated about the risks of inappropriate surveillance of their courses, and how to identify this in their learning management systems, and must stand ready to assert their rights to fair evaluations of online teaching. For students, however, and in a non-union environment, all these tasks are more difficult, and the effects of surveillance even more pernicious.

[1] “Part-time” is CUNY’s contractual term for all non-tenure-track faculty. Some teach only one or two courses a year. Others have a credit load higher than “full-time” tenure-track faculty. See CBA Article 15.2, “Workload for part-time members of the Instructional Staff” and “Additional Side Letters and Agreements: Teaching Load Reduction Agreement.” For contingency, see CBA Article 9, “Appointment and Reappointment” and Article 10, “Schedule for Notification of Reappointment and Non-Reappointment.” All at https://psc-cuny.org/cuny-contract.

[2] Tenure-track faculty are contractually mandated to receive an annual evaluation which includes assessment of “Classroom instruction and related activities; Administrative assignments; Research; Scholarly writing; Departmental, college and university assignments; Student guidance; Course and curricula development; Creative works in individual’s discipline; Public and professional activities in field of specialty”(“CUNY Contract” Article 18). Only a small subset of Adjuncts receive such an evaluation; their union suggests they should request one if they are eligible for a relatively rare three-year appointment (Clarion Staff).On the other hand, Adjuncts “shall be observed for a full classroom period” once a semester, while tenure-track “may be observed once each semester” (“CUNY Contract” Article 18).

[3] In legal parlance, referring to arrests and prosecutions thrown out if the evidence was based on an illegal search or seizure, this is known as “the fruit of the poisonous tree.”

Marc Kagan is a graduate student in the History Department at CUNY’s Graduate Center, where he is writing his dissertation on NYC’s Transport Workers Union Local 100. He spent two years as a Professional Staff Congress grievance counselor for the Graduate Center, the School of Professional Studies, and several other CUNY campuses.