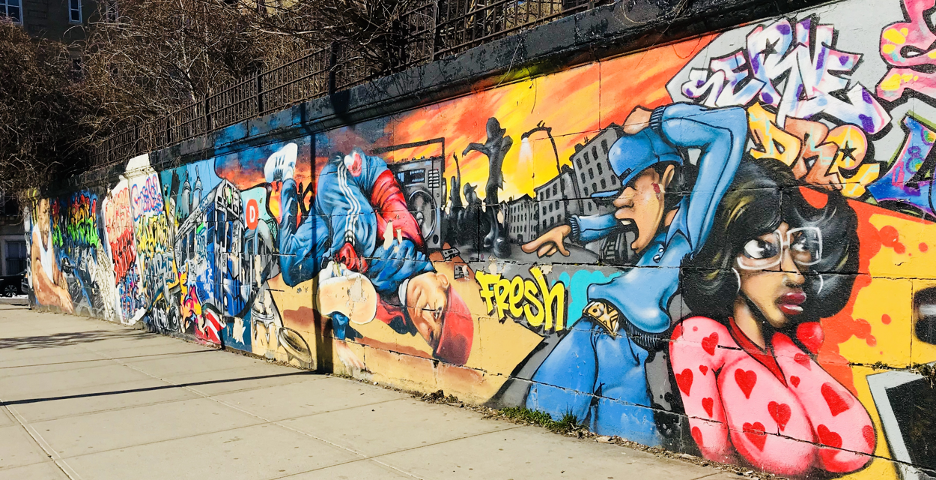 Nga Than, The Graduate Center, CUNY

This assignment asks students to use the ubiquitous cell phone to take pictures of their neighborhoods, where they live, work, study, and play. Then they engage with the pictures in a sociologically critical way. It encourages critical thinking and analysis and promotes a better understanding of urban processes.

The sociological imagination enables us to grasp history and biography and the relations between the two within society.
C. Wright Mills

Sociologist C. Wright Mills calls the insight that allows one to understand one’s position within society the “sociological imagination.” My goal in teaching sociology to undergraduate students has been to activate their sociological imagination. I assist them in the process of understanding how personal troubles and public issues are linked. In Urban Politics and Policy, which I have taught at City College every spring since 2016, I designed multimodal assignments to cultivate students’ sociological imagination. In this article I will describe “Visualizing the Urban,” a multimodal assignment which asked students to use their cell phones to engage with sociological phenomena in their daily lives, and then I will use pictures taken by students to show how they produced knowledge that was relevant to their lives.

In the era of social media and ubiquitous smart phones, young people are socialized in a visual culture where they readily share selfies and pictures of their social lives (Marwick 2015). I aimed to bring their critical eye to urban phenomena, which students learned to analyze in an urban sociology class. In “Visualizing the Urban,” students took pictures of their lived environment and connected what they observed to theoretical concepts. Students performed two separate tasks: (1) taking a picture in their work/residential environment, and (2) using the theoretical vocabulary that they learned in class to interpret the picture. The goal was for students to apply sociology vocabulary in explicating social phenomena they encountered.

“Visualizing the Urban” was one of many scaffolding assignments that I assigned during the semester. Along with other assignments, this assignment aimed for students to take sociological concepts out of the classroom and into the real world. Before doing this assignment, students learned about their neighborhoods through a census tract exercise. They examined their neighborhoods’ characteristics in depth through census information. They first extracted census statistics, then wrote a five-page report about various demographic information on their neighborhood such as race, educational attainment, and average income, and interpreted what the variables meant, asking questions about the social environments that they were embedded in. After the assignment, they proposed possible explanations as to why their neighborhoods were socially structured in specific ways. These questions and possible explanations served as the starting point for “Visualizing the Urban.”

As many students walked the streets of New York, they noticed gentrification’s social and urban processes engulfed their lives. Some wrote about new ethnic restaurants in their neighborhoods; others wrote about the beautification of their neighborhood walls with new murals/graffiti that supposedly captured their neighborhood’s character while, at the same time, drawing in new, young residents with more disposable income than they and their families.

Nancy Moreno, a third-year sociology major, observed the contradictions that this mural holds. On the one hand, she described it as reflecting the culture in South Bronx. On the other hand, she analyzed the mural as part of a gentrification process that “has been stretched to all forms of neighborhood upgrades” and is a sign of tourist attraction. Using her sociological imagination in her interpretation of the image, Nancy shows how her history and biography are intertwined. As a resident of the South Bronx she witnesses and fears these waves of gentrification that leave “the poor and working class … with no choice but to leave.” Nancy’s analysis of the mural thus illuminates her personal stake, the history and politics involved in gentrification as based on race and class, and the relationship between the two.

In his analysis of the “park,” Joshua used his sociological imagination to analyze the structural dimension of this neighborhood by bringing in statistics around poverty and class that demonstrated a public health crisis for those who could not afford healthier food choices. At the same time, he discussed his personal relationship to the park and the community members who used it to “grow fruits and vegetables as a way of getting healthy food options.” Space in New York City is viewed as a rare commodity. The use of this park served as urban revitalization in impoverished communities, creating an area that encouraged community engagement and emphasized Jane Jacobs’s ideals on the importance of eyes on the street and the importance of the vitality of the neighborhood.

Gentrification is all-encompassing, prompting my students to reflect upon living in a community within the New York metropolis. The concepts they often evoke are Gesellschaft [community] and Gemeinschaft [society]. The German theorist Ferdinand Tönnies used these concepts in the late nineteenth century to describe the transition from a small social group to a larger one, where the smaller social organization is often described as close-knit, while the larger one is more impersonal and instrumental.

Ayda Hossain described the social bonding of protesters in front of an Amazon bookstore as a sign of Gemeinschaft.

She argued that the protest against Amazon connected and unified people and used herself as an example: “These people are against the Amazon corporation. This event therefore unified people and connected them through interpersonal contact.” Even though she was busy on her way to an event, she “stood there with them for a few minutes and expressed similar feelings. This created a sort of bonding between strangers.” She finally argued that even in a big society like New York, social media had brought strangers together. Therefore, she raised a question whether the distinction between Gesellschaft and Gemeinschaft has been blurred because of new media and technology.

Most students commented that this exercise helped them think more critically about what they encountered on a daily basis. This low-stakes assignment created an opportunity for them to apply abstract sociological concepts to their daily lives and connect their lives with the sociological phenomena they were a part of. They reflected on both their lives and the theoretical concepts that they learned in the first half of the course. The assignment served as a starting point for a larger research project they submitted at the end of the course. In the second half of the course, they often brought up the pictures they took as a reference to make a theoretical point during class discussions. Students were more forthcoming with their lived experiences and ready to share them on various topics. Not only did they acquire deeper understanding of theoretical concepts, they were also able to use their experience to demonstrate how these concepts were applicable in their lives.

Through this exercise, I learned from my students where they lived, worked, and played. It was an opportunity for me to co-experience their daily lives through the visual observations. I was able to walk with them virtually around New York, gaze at a social phenomenon, and understand a slice of their social world through their own narratives. Furthermore, their reflections on how they could connect this exercise to various urban struggles that they and their families experienced show that they started thinking about how sociological concepts could be meaningfully interpreted and applied to their daily lives. In this sense, they were able to use their cell phones to learn how to engage critically with the surrounding environment.

In the age of social media, younger people use highly visual media such as Instagram and selfies to present themselves. In my classroom, I asked my students to reclaim those ubiquitous digital tools for a critical look at their urban living. They engaged the practice and connected abstract concepts, numbers in the census, to visual recognition that they encountered on a daily basis. By engaging with what they produce critically, my students applied their sociological knowledge to their daily lives. They also began to ask important questions about the phenomena around them. In the end, a few students further developed their final research projects: affordable housing, vandalism, urban poverty, and how New Yorkers interact with public spaces. As a scaffolding assignment, this exercise helped them formulate research ideas in the first half the class.

[1] All names in this article are pseudonyms.

Previous: Introducing GIS in the History Classroom: Mapping the Legacies of the Industrial Era in Postindustrial America
Next: When Wikipedia Fought Back

'Visualizing the Urban' has no comments