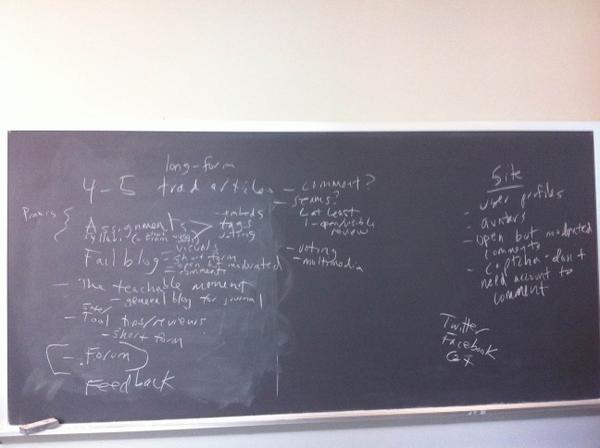 Each week, a member of the JITP Editorial Collective assembles and shares the news items, ongoing discussions, and upcoming events of interest to us (and hopefully you). This week’s installment is edited by Leila Walker.

Celebrating Five Years of The Journal of Interactive Technology and Pedagogy

This will be my last roundup as Managing Editor before I pass the mantle to Laura Kane at the end of August, and I wanted to thank you all for a very successful year at JITP. Over the past two semesters, we have published two great issues and numerous short-form pieces, started a new Collective-generated weekly column, and begun the process of moving to a more up-to-date and accessible website and management system. We have developed communications and outreach strategies to build our base of readers and authors. I am so grateful for everyone’s hard work and enthusiasm. JITP has always held experimentation with form and content among our core values, and I believe we continue to make great headway as a group toward transforming what “counts” as academic scholarship.

So how did we get here, and where are we going? TL;DR: This roundup includes a look back at JITP’s history, a glimpse at where we’re headed, and some professional updates from our Collective Members.

Yes, it’s true! JITP is celebrating its fifth anniversary … sort of. The journal was initially conceived in May 2010, in the wave of organizational momentum following the Digital University conference at the CUNY Graduate Center. At first our goals for the journal were small and localized: we planned to use Open Journal Systems to showcase some of the best projects being created by students in the Interactive Technology and Pedagogy Certificate Program. Claire Fontaine and I built a placeholder site over the summer, and at the beginning of August Steve Brier, the coordinator of the certificate program, invited ITP students, faculty, and alumni to join the initiative: 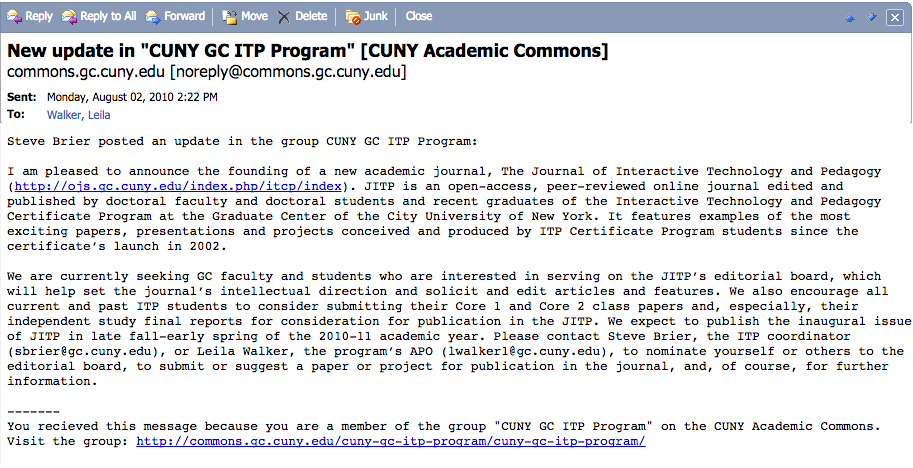 Our goals for the journal expanded fast. We wanted to create something that was rooted in the ITP certificate program but not limited to the program. We wanted to showcase work by scholars at all levels, from students to advanced faculty, and we wanted the journal to facilitate ongoing mentorship in a collaborative, interdisciplinary environment. While Steve Brier had conceived of the journal as a student-run publication with faculty advisers, the make-up of our founding group—half students, half faculty—shaped and continues to shape our pedagogical mission to foster constructive partnerships that challenge the distinction between student and teacher. (In the meantime, I created a less ambitious site to showcase ITP student work.)

Ben Miller took minutes at our first meeting (he still takes the minutes at almost every meeting, and I believe he deserves a trophy for it): 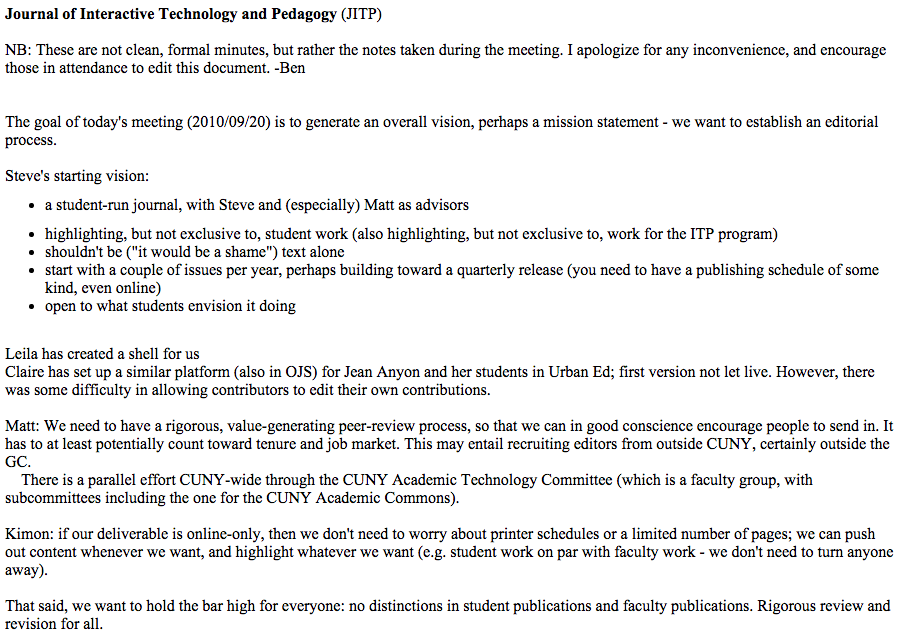 Figure 2. Minutes from the first meeting of the JITP Editorial Collective.

Our original timeline—to form the journal and launch the first issue in a single semester—now seems, frankly, insane. Over the next year and a half, we honed our vision, brainstormed sections, drew several versions of the logo, played around with OJS, determined that OJS’s format was too restrictive for our big dreams, built and rebuilt the website, called for papers, brought in new members, argued and processed and live-edited the mission statement at meetings that could last up to three hours and often tested our (or at least my) patience for the messy process of democracy.

But we were a collective, and we worked together. These early meetings forged our identity as a journal that supports new and innovative work by saying YES to insane ideas.

Figure 3. An early chalkboard sketch as we brainstorm ideas for the new journal.

Finally, in March of 2012, we launched our first issue, co-edited by Sarah Ruth Jacobs and Kimon Keramidas. We rewarded Sarah’s hard work on this inaugural issue with more hard work when we unanimously voted her the first managing editor of JITP in December 2011, a position she held until Anne Donlon took over in the fall of 2013.

Today, our Collective has swelled to twenty-one members from across disciplines and institutions. The messy democratic processing that characterized our early meetings is no longer quite feasible, so we have divided into several smaller teams that take care of tasks like copyediting, communicating, editing, and evaluating our processes (we haven’t yet nominated a navel-gazing committee, but we might). The original eight members of our collective split neatly into four students and four faculty members, and we maintained this equality when we expanded to fourteen members (seven students, seven faculty or staff) at the launch of the first issue. But “student” is an ephemeral identity, as I noted in the Introduction to Issue Four, and of our twenty-one current members, only four will still be students come the fall. Does that matter? And if so, what’s the solution? We’d love your input.

We’ve accomplished a lot over the years: the number of submissions we receive per issue has more than doubled (seriously); we’ve started producing content at least weekly; we’ve increased both the quality and the quantity of the work we publish.

And we’re still moving forward. We are currently in the process of a website redesign to make our journal more flexible, accessible, and attractive. We are in the process of finding a new management system to replace OJS. And we are revisiting one of the journals original goals, to bring student work and work-in-progress to a wider audience for constructive feedback. We hope that this new “Blueprints” section will not only help students (and others) revise their digital projects, but will also make visible the often obscure work of review and revision—the collaborative effort between editors, peer reviewers, and project authors that leads to a finished project. As Sarah and Kimon wrote in the Introduction to our first issue: “This model makes materials available to the larger scholarly community first and then leaves the review process in the hands of our readers, who will participate by providing feedback through comments in the journal’s blog-style environment. This open dialogue will be important in developing healthy online discourse and encouraging revisions by submission authors that take into consideration continually developing themes and trends.”

Where should we go next? We’d love to hear suggestions—however insane they might sound.

Starting this fall, Laura Kane will be taking over from me as Managing Editor—please join me in welcoming her to our Collective and our community! Also this fall, Michael Mandiberg will serve as Acting Coordinator of the ITP Certificate Program while Steve Brier is on sabbatical, and he will be joining the Collective to maintain the connection between the program and the journal.

I am also proud to announce the recent accomplishments of my friends and colleagues on the JITP Editorial Collective:

Greg Donovan was recently made an Affiliate Faculty Member of the Urban Law Center at Fordham Law School.

Tyler Fox accepted a Lecturer position at University of Washington, Bothell, where he will be the Studio Director of the Interactive Media Design program.

Matt Gold and the GC Digital Scholarship Lab won a grant from the Mellon Foundation to launch Manifold Scholarship—a platform for iterative, networked monographs—in partnership with University of Minnesota Press.

Amanda Licastro accepted a position as the Assistant Professor of Digital Rhetoric at Stevenson University.

Michael Mandiberg’s show, “From Aaaaa! to ZZZap!,” opened at the Denny Gallery to great press.

Renee McGarry and her colleagues at Art History Teaching Resources won a Kress Digital Resources Grant to support preliminary research toward development of Art History Pedagogy and Practice, an academic, peer reviewed e-journal devoted to pedagogy in art history that will be hosted on the AHTR website.

Ben Miller accepted a position as Assistant Professor of Composition, focusing on Digital Research and Pedagogy, at the University of Pittsburgh.

Leila Walker accepted a CLIR Postdoctoral Fellowship at St. Lawrence University, where she will serve as Assistant Program Director for Crossing Boundaries: Re-envisioning the Humanities for the 21st Century, a project funded by the Andrew W. Mellon Foundation.

Luke Waltzer is moving from Baruch College to the CUNY Graduate Center to become the founding director of the new Teaching Center.

'This Week in Digital Humanities and Pedagogy' has 1 comment