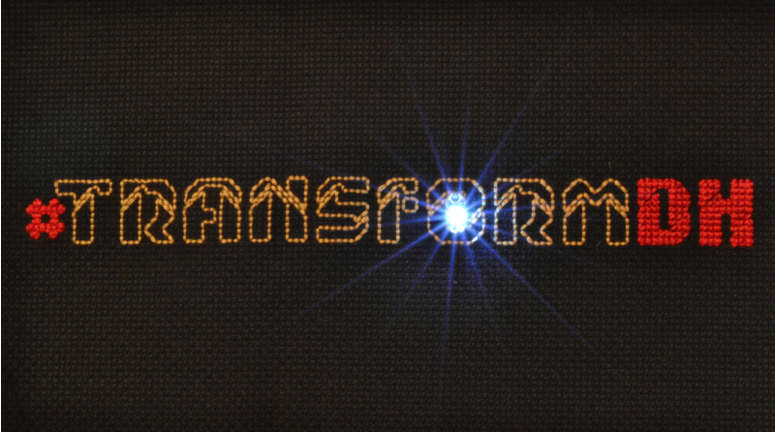 Each week, a member of the JITP Editorial Collective assembles and shares the news items, ongoing discussions, and upcoming events of interest to us (and hopefully you). This week’s installment is edited by Amanda Licastro.

My weekly round-up consciously focuses on one inspiring event: the #transformDH conference at University of Maryland. In a week filled with violence, loss, heartache, political and economic strife around the world, this conference was a shining beacon of hope for me. TransformDH flipped the script on academic conferences in so many important ways: it was free to attend, the speakers were all from groups marginalized in academia, it included multimedia presentations from people outside of higher education, and it was intentionally accessible (including live-streaming, ASL interpreters, captioning on the media, and a location in an handicap accessible building).

Despite the impending hurricane, the room was filled with a small but passionate group of students, staff, and faculty members from all realms of the humanities broadly defined, in addition to the dozens of virtual attendees participating via livestream and twitter (see the Storify here). All of these participants believed in the mission that imbued this event: inclusion. And not just inclusion simpliciter, but inclusion that is transformative. This was demonstrated by the welcoming environment and the focus on providing – to borrow Jarah Moesch’s term – “care” for everyone involved.

The #transformDH movement started in 2011 at the American Studies Association (ASA) conference in Baltimore, but the core team is adamant that anyone who uses the hashtag and contributes to the conversation is part of this collective. The concept “collective,” stressed and historicized in opening remarks by Martha Nell Smith, recurred throughout the presentations. “Collective” came to mean a collaboration that is not hierarchical, or a distributed network that crowdsources knowledge and labor toward a common end.

This concept was enacted through panels of presenters and collections of projects that showcased a wide range of perspectives on how the digital humanities can be used as a tool for intervention (see full lineup here). The conference website (maintained by Alexis Lothian and by those mentioned here) proclaims the mission of #transformDH as

an academic guerrilla movement seeking to (re)define capital-letter Digital Humanities as a force for transformative scholarship by collecting, sharing, and highlighting projects that push at its boundaries and work for social justice, accessibility, and inclusion” (#transformDH Tumblr).

And this is precisely what happened over the course of the day. The first half of the day featured commentary and projects which raised awareness about the many issues facing those engaged in Digital Humanities (DH). For instance, panelist Anne Cong-Huyen voiced concerns about the increased reliance on contingent positions funded with “soft-money” in DH, and noted that we need to recognize the work done in marginalized locations such as small liberal arts colleges, community colleges, and outside of the academy. Moya Bailey and Amanda Phillips discussed the interdisciplinary nature of DH work, and noted that many scholars working in gender, queer, critical race, and ethnic studies do not identify DH as their home discipline, either because they do not feel welcome or because they are dedicated to legitimizing their fields without DH. 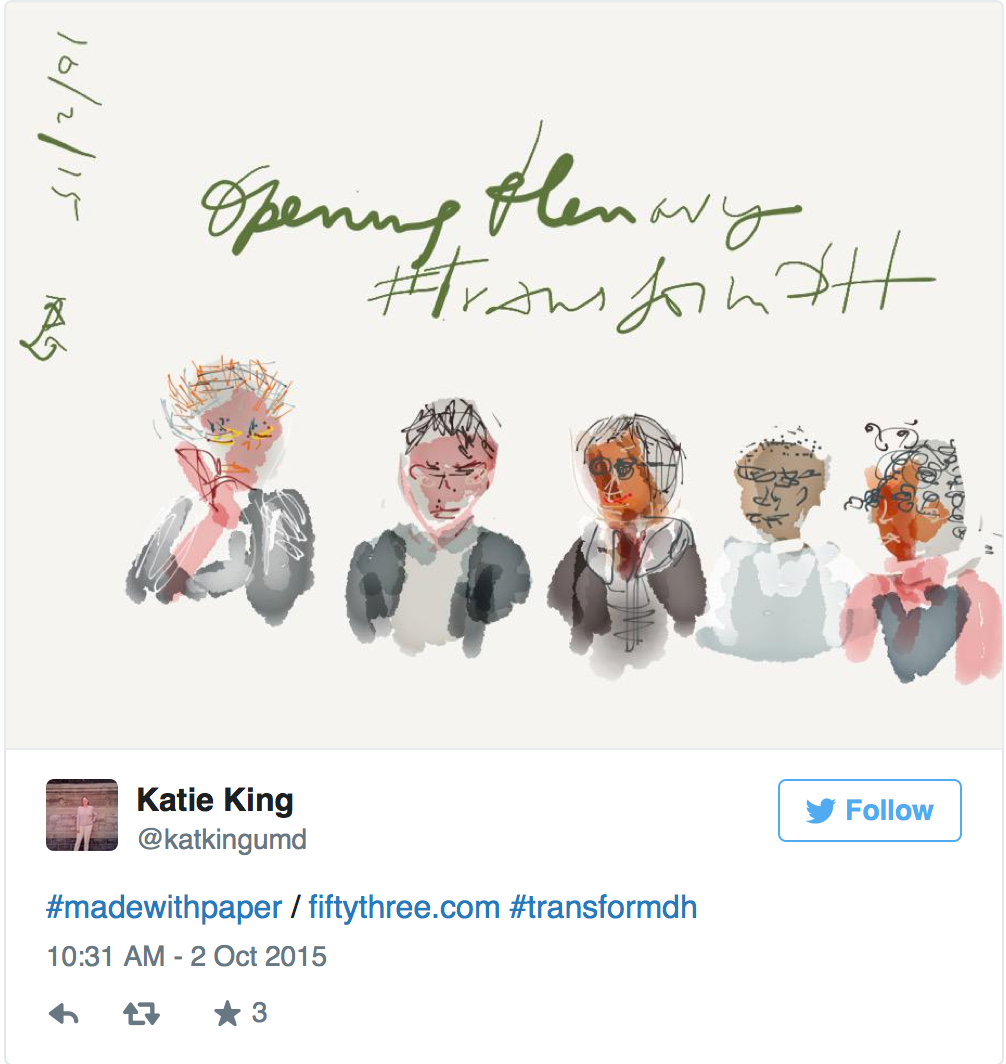 The panel also discussed institutional barriers to working as a “collective,” such as the need for individual recognition and formalized mentoring structures that do not allow for a distributed network of collaboration. The room seemed to tangibly feel the tension between the need to recognize the labor of individuals, and the desire to acknowledge that none of us works alone.

Next, Martha Nell Smith prompted the panelist to share projects that exemplified the mission of #transformDH. Here is a short list of every link I could capture:

These projects are connected by their ability to give voice and recognition to marginalized populations through the use of digital technology, for which Moya Bailey provided this lovely metaphor: 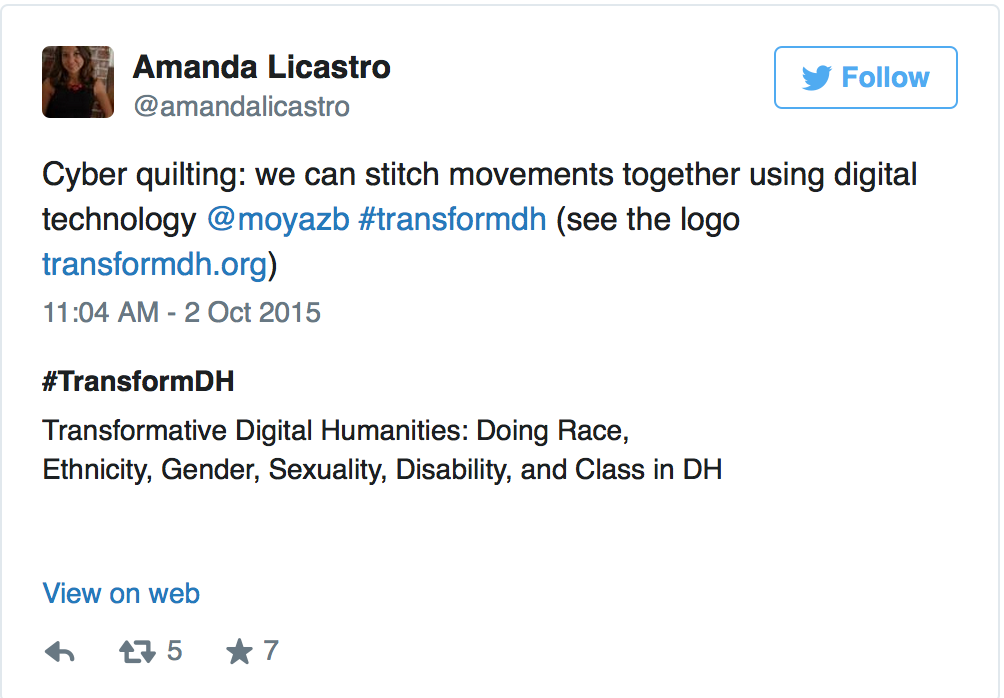 This panel was followed by a video screening of #transformDH projects that I really cannot do justice with a short description. Fortunately, they are available for you to view here:

For audience reactions to these projects, check the Storify for the accompanying tweets, especially by Kathryn Kaczmawr, who captured the second video showcase incredibly well.

The second video showcase was followed by a question and answer session with the creators of the last video; the video and panel were almost entirely in ASL with translators for both panelists and audience members. The video, which consisted of interviews and footage of performances, was awe-inspiring: beautiful, powerful, and passionate. I highly recommend watching. The panel afterward announced that the American Sign Language (ASL) Shakespeare Project will be holding an month long celebration next October in DC, which will include performances of Shakespeare’s plays in ASL, exhibits of original manuscripts, and lectures about the project. The team fielded questions about which version of ASL would be used, why they chose the Bard, and what challenges the language of these texts presented. To find out more come to one of the many exciting event in October 2016.

Then it was time for final panel of the day, “Emergent Intersections of Disability and the Digital,” with M.W. Bychowski (George Washington), Angel Love Miles (UMD), Izetta Mobley (UMD), and Jarah Moesch (UMD), moderated by Beth Haller (Towson University). This panel was not livestreamed, but the discussion was mindblowing. I will respect the rights of everyone in this panel and not divulge too many details, but many of the thoughts expressed can be found on their sites:

The keynote Keynote lecture was delivered by Lisa Nakamura (University of Michigan),

“The Unwanted Digital Labor of Social Justice: Race, Gender, and the Origins of Call Out Culture.” Nakamura was introduced by Jason Farman who asked us to tweet how Lisa influenced our work, which speaks to the immense impact Nakamura continues to have on this field. I was one of many who tweeted Nakamura’s first article, “Race In/For Cyberspace: Identity Tourism and Racial Passing on the Internet,” which I read in The Graduate Center’s Interactive Technology and Pedagogy program. Nakamura’s keynote focused on embodied experiences online, particularly how women who “call out” injustice in online forums face abuse wrought with physical rhetoric that has physical effects on the body. Nakamura notes that feminists have always been interested in the material, but that the “body” is left out of the digital conversation. Nakamura returned to Gloria Anzaldua’s “This Bridge Called My Back” to discuss digital labor, pointing to the “This Tweet Called My Back” movement. This led into a discussion of the labor of moderating content on the internet – by “volunteers,” by part-time underpaid housewives (Metaverse Mod Squad), and (as I pointed out in the Q&A) by the human moderators who remove offensive content for media corporations, but also as the free labor of creating content for social media sites to mine: 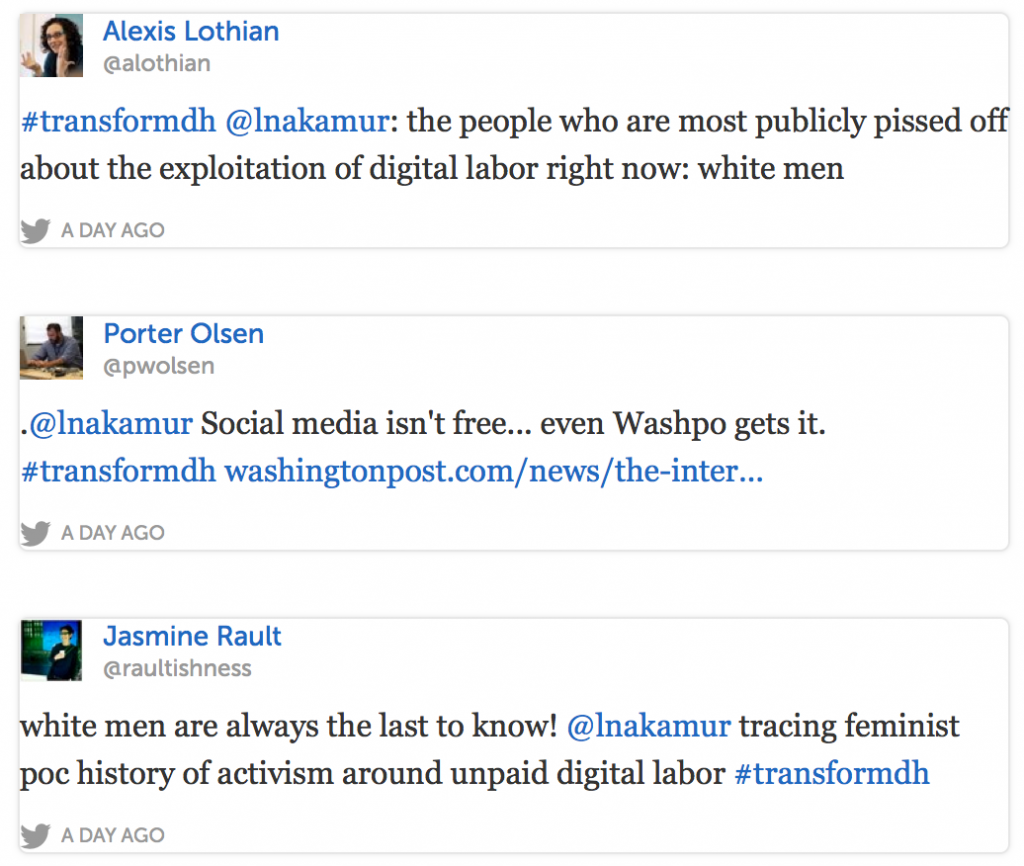 The concerns Nakamura expressed over the treatment of women online was really a call to action. How can we work together to moderate content on the internet without fear of physical and mental harm? It is time for a revolution.

Thank you to the organizers, speakers, and participants of the #transformDH conference. Your words, actions, and ideas all speak loudly, and incite the desire for change.

I am left with these questions: What if, in our future, we cared for each other / took care of each other / cared about each other’s needs and worked together meet those needs? What would this revolution look like?

This post is dedicated to the victims of the #UCCShooting and their grieving families and friends. You are in my heart.

Share this article
Previous: This Week: How Will the Changing Roles of Data and Media Affect Teaching and Learning?
Next: This Week: Digital Pedagogy Institute Postmortem and a Podcast Potpourri

'This Week: #transformDH' has no comments