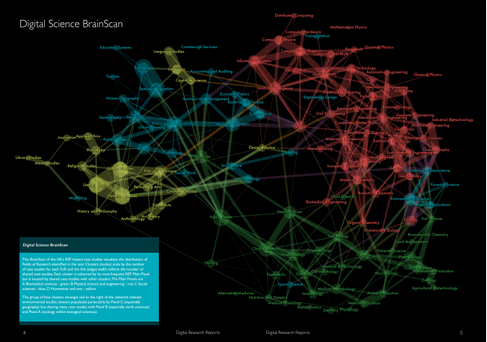 Hello, all, and happy #PlutoFlyBy day! There’s a strong current of science and technology on the Twitter breeze this week. Here are some of the things I’ve found worth passing along.

The Computer Science Teacher’s Association is holding its annual conference this week, ending today; you can follow the collective notes at https://twitter.com/hashtag/CSTA15, where you’ll find links to activities like this offline interactive lesson in graph-paper programming.

The Summer Doctoral Programme at the Oxford Internet Institute is ongoing, and JITP‘s very own Sava Saheli Singh and Michelle A. Johnson are lighting up the #oiisdp Twitter hashtag, along with a whole host of smart and engaged participants. Readers may be especially interested in the collaborative Zotero library of references from talks (in progress).

A half-day symposium on Research in the Digital Age, focusing on remixed and/or digital dissertations — what can I say, doctoral dissertations are much on my mind these days — took place today at Trinity College, Dublin. Check out the Storify for arguments about why an uploaded PDF isn’t an acceptable requirement for dissertation repositories, examples of recent projects that challenge that paradigm, and some of the challenges facing those in humanities departments pushing for more acceptance of the diss-that-is-not-a-book. 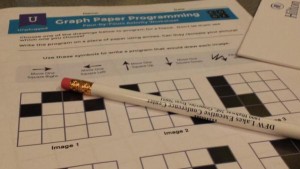 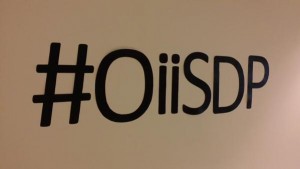 A team led by Rebecca Sutton Koeser at Emory has re-launched Belfast Group Poetry|Networks, a history of a writing workshop that connected a number of prominent writers in Northern Ireland. The new site adds a series of beautiful new interactive data visualizations to enhance our understanding and investigation of the history. Built with d3.js, the visualizations model a lot of best practices for this sort of work: they re-present the same data in multiple ways, give visitors control over some of the display variables, and pair the visuals with essays that both explain the origins of the data and highlight interesting findings. 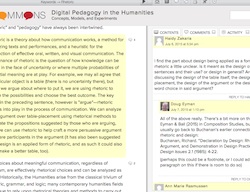 Figure 3. Preview of Storify by the Digital Repository of Ireland. 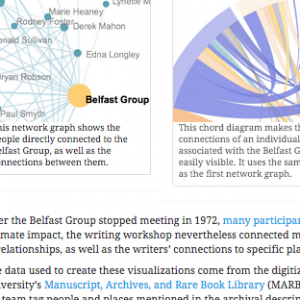 Jonathan Adams, Tamar Loach, and Martin Szomszor of Digital Science today released the first report from a meta-analysis of nearly 7,000 case studies of economic and societal impact from university research projects in the United Kingdom, entitled The Diversity of UK Research and Knowledge. Aimed at making the dataset more approachable, the report includes an interactive network showing clusters of similar studies (e.g. economy, arts, environment, health, and, yes, education) through which the individual case studies can be discovered and read in full.

Figure 5. A thumbnail of one of the “BrainScans” produced by Digital Science to visualize how research fields connect to one another. For the full version, see page 5 of the report.

As excited as I get about networks and influences flying all over the place, it’s important to think about some potential drawbacks. Scott Weingart has a great new blog post called “Down the Rabbit Hole” about the common practice of re-posting from other sites and the dangers of re-posting re-posts without citing the original source. As he sums it up:

We write in an environment that affords full references and rich hyperlinking, and yet we so often revert to context-free tumblr-like reblogging which separates text from context and data. We’re reverting to the affordances of 18th century letters, 19th century newspapers, 20th century academic articles, etc., and it’s frustrating.

The post struck a chord with me, and as I was preparing for this roundup it helped me avoid falling into more than one misleading “new” story from years ago. It’s especially interesting to me to see “20th century academic articles” as part of the list of problematic practices: can we do better with our “qtd. in” citations, even in traditional forms of writing?

Plagiarism detection software is back in the news at Inside Higher Ed with an article entitled “What is Detected?” The headline story is that even if you are a fan of letting machines detect re-used language, Turnitin may not be doing such a great job. Susan Schorn, whose research led to this finding, gets the money quote:

From the comments section, though, there’s little sign that the red flags raised by the article will lead many professors to re-examine their own writing prompts, and to ask whether assignments that enable plagiarism are the best tools for their pedagogical goals. Still, we can dream.

Digital Pedagogy in the Humanities: Concepts, Models, and Experiments, a “collection of downloadable, reusable, and remixable pedagogical artifacts,” invites feedback on its first batch of artifacts, which are organized by keyword:

Figure 6. Screenshot from Digital Pedagogy in the Humanities

Comments on artifacts in this first set of keywords are open only until August 3 — just a couple of weeks away!

Finally, one of my favorite online learning resources returned to the Q&A stump today: Randall Munroe’s what-if.xkcd.com returns after a three-month hiatus with a high-impact illustrated discussion of the New Horizons mission. You can view all 137 (and counting) demonstrations of academic reasoning and research at what-if.xkcd.com/archive.

Did we miss something? Send hot tips, cool CFPs, and warmly worded rants to admin@jitpedagogy.org.

'This Week in Digital Humanities and Pedagogy' has no comments